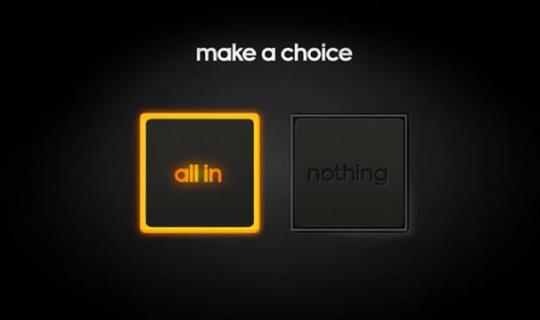 The Adidas ‘All In or Nothing’ campaign is a bold statement and an indication of a new, high risk sponsorship strategy being adopted in order to achieve the necessary cut through amongst competitors. Adidas has been the worldwide leader in the football category across the years and this latest campaign, believed to exceed the £50 million mark in terms of budget, is by far their most standout and risky to date.

There is a common thread that runs through the vast majority of Nike and Adidas’ innovative World Cup campaigns and that is fan engagement and sentiment. Of course the requirement to celebrate the world’s best footballers wearing the brand’s latest footwear innovations holds importance.

But both Nike and Adidas would be the first to acknowledge that campaigns that connect and engage on a deeper level with the consumer hold the key in their battle for global sportswear supremacy.  Football fans are placed firmly in the driving seat, at the heart of both Nike and Adidas’ World Cup campaigns. They are invited to engage, interact and converse with other fans from all over the world with Nike and Adidas positioning themselves as the facilitator in making this possible.

This is never more apparent than with Nike’s #riskeverything campaign as young footballers imagine they are world famous players playing with the likes of Ronaldo, Neymar and Rooney. This is a campaign completely centralised around Nike making dreams a reality; capturing the imagination of a football audience in the process. Rewind 8 years and huge similarities can be found with Adidas’ ‘Recruitment’ campaign around the 2006 FIFA World Cup in which two boys fantasise about who would be in their dream team before the likes of Beckham, Ballack and Kaka enter the fray.

The benefits of this type of campaign speak for themselves which makes the thought of Adidas ceasing communication with this key demographic even more surprising. Although the idea of inviting fans to click "all in” resonates with the premise of the campaign; there is a danger here of alienating a global football audience. Whilst Adidas would expect most to sign ‘all in’ maybe they haven’t yet considered the prospect of fans seeing this ‘option’ as an unwanted hurdle in order to engage. What Adidas may view as daring; the consumer may perceive as arrogance and this is the thin line that has been drawn. In the same way that football fans will be asked to display their loyalty to one competing nation at the World Cup, Adidas are asking the same in the battle of sportswear brands. But is the consumer prepared to show this type of commitment?