THE ATP FINALS - A WORTHY INVESTMENT FOR SPONSORS? 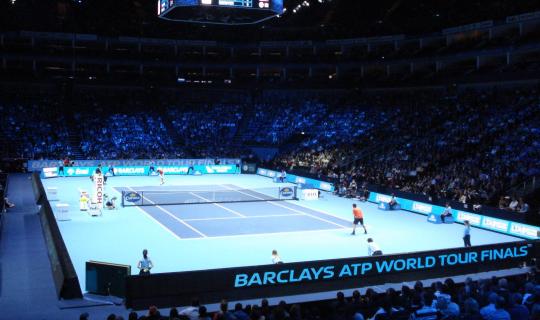 In the UK, there really is only one tennis tournament that we care about right? Being honest, do you really care who wins the Barclays ATP Final’s?

I mean it would have been nice to see Andy Murray win, but unless you are the most hardcore of tennis fan, you most likely won’t be running up and down the street screaming “Andy Murray ATP World Tour Finals Champion”!

The ATP finals, like other non-slam tournaments, are a great opportunity for you to see the best players in the world playing in a tournament that you have a reasonable chance of getting tickets for.

But unlike the other non-slam tournaments, all of the best players in the world push to be there. In order to qualify, you must be ranked in the top eight players with the most countable points accumulated in Grand Slam, ATP World Tour, and Davis Cup tournaments during the year.

Over recent weeks, you may have seen all the top players desperately trying to accrue enough points to get themselves into the top eight – Murray played 23 matches in 37 days. But why? Well for Andy, perhaps he saw it as an opportunity to ‘win back’ some fans he may or may not have upset during the Scottish referendum, but perhaps more importantly – it’s a payday. A participant gets £98,000 whilst an unbeaten champion will pocket a cool £1.3 million – grand slam territory.

For an organisation who wants to engage in sponsorship of tennis in the UK, the ATP finals offer a second major tournament after Wimbledon. Wimbledon is a traditional event that offers more in intangible (subjective attitudes and perception) benefits, whilst the ATP finals, a commercially focussed event, offers more in the way of tangible (quantifiable) assets.

In the majority of large deals, organisations look to sponsorship to meet one or a number of objectives, such as engaging with other companies in Business to Business (B2B) pursuits and engaging with the consumers in Business to Consumer (B2C) activity. They may also look to tighten their relationship with their employees or satisfy some corporate social responsibility. In truth, if you’re a big enough company then you will in some way try to tick all four boxes.

The big areas of significance for sponsors are the B2B and B2C elements, and this is where grand slams and the ATP finals differ.

A key way of maximising B2B opportunities is through strong hospitality and money-can’t-buy moments. A large majority of reputable sporting and entertainment events throughout the world offer hospitality opportunities. These tend to include food, drinks, the best seats in the house, and most probably a speaker, such as an ex or current player who will come and give a Q&A to your clients.

Wimbledon and the ATP finals are no different, both will offer hospitality opportunities to their sponsors (Wimbledon have suppliers not sponsors), and both have their benefits. I would argue that Wimbledon offers the better opportunity – which would you prefer; the best seats for Murray vs Djokovic, with an after dinner Q&A from Boris Becker at the O2 arena… or at Wimbledon?

However, the quality of the players on show at the ATP finals, in theory and ignoring last night's domination by Federer means that every game should be a tough contest. At Wimbledon, in the early stages, the top 8 players can play against players in the lower depth of the rankings, usually resulting in a bit of a one-sided match. The ATP finals may be a more attractive viewing for a client who, before the accepting the invite, knows that there is the potential be in for a high intensity and competitive match.

Timings are a key consideration, with the ATP final offering a good opportunity to engage with your clients after work – rather than at the weekend when they may have better things to do. Wimbledon on the other hand has full day events over two weeks, and you may be able to persuade a client to take day off work to attend.

The difficulty, and what plays in the ATP Finals favour, is that you are not guaranteed in advance of the date what players will be playing. The two session (one day time and one evening) structure the ATP final’s employ; allows clarity with a host being able to inform a client in advance that the world number one will be playing the world number two at a particular time.

On the B2C side of things, it could be suggested that the ATP finals offer sponsors more opportunity for consumer awareness. This is obvious from the branding around the centre court at the O2. Sponsors of the ATP finals get branded perimeter boards around the tennis court; Corona have branding on either side of the net, Head and Ricoh also have prominent branding on court.

At Wimbledon, in a desire to be viewed as a traditional event rather than a commercial one, there is very little on court branding – a couple of small supplier logo’s here and there.

Wimbledon’s suppliers are positioned to fulfil a purpose that ensures the success of the event, rather than being a part of the tournament for commercial gain. Wimbledon still needs to generate revenue and the attraction for potential suppliers is intangible association rather than branding.

One very interesting, glaring omission from the list of suppliers on the Wimbledon website is that of probably the most recognisable brand associated with the event – Pimms. Pimms and Wimbledon go together like err…… strawberries and cream…. so why is there no formal marketing relationship?

Well firstly there isn’t really any great need for Pimms to pay to become a supplier; they get brand awareness and sales through consumer association alone. There is also no desire for Wimbledon to engage in an official relationship with Pimms as out of a total of eleven official suppliers, three are alcohol brands and adding a fourth maybe wouldn’t send the right message.

Wimbledon’s alcohol suppliers, Jacobs Creek, Stella Artois and Lanson, will have been aware of the unofficial relationship between Pimms and Wimbledon before coming on board as official suppliers. All three will each have their designated categories within the combined alcohol category.

The fewer companies with marketing rights in this category, means a less cluttered the space and an increased likelihood that any activation will have cut-through to the market. This ultimately affects the value of the alcohol category to the current suppliers, which will be diminished with the addition of a fourth supplier with marketing rights.

Wimbledon does benefit from being on terrestrial TV, whereas the ATP finals are on Sky. Being on the BBC increases the number of people exposed to the tournament - however given the lack of branding opportunities on court, it doesn’t way too heavily in favour of Wimbledon’s suppliers.

If I was the chairman of a big multi-national company and I wanted to sponsor a tennis event in the UK, I would be instructing my sponsorship manager to head for the ATP finals. Although Wimbledon offers an intangible prestigious relationship by supplying to one of the best (if not the best) tennis tournaments in the world, the difficulty may be that my company does not provide a product or service that delivers the desired purpose for Wimbledon – risking the potential for Wimbledon’s traditional approach to be slightly tarnished.

The ATP final’s on the other hand is an event tailored for commercial organisations, with branding opportunities that appeal to those organisations who do not fit the supplier requirements for Wimbledon.

Plus – I bet there isn’t a bottle of Pimms in sight at the O2!