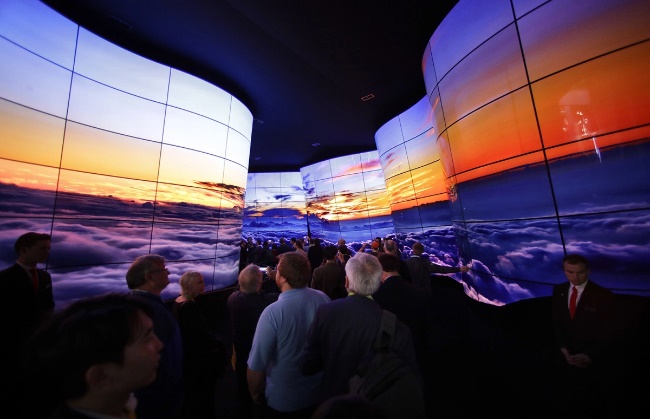 Held annually in Las Vegas, CES is the biggest technology show in the world and this year was no exception. CES 2018  was big and bold in setting the tone for things to come. Long story short, there are exciting things to come for consumer tech. We were there to support Monster Products but did get a chance to check out some other exhibits. Despite a big technical blunder, TV’s wowed visitors with dramatic displays of product innovation, check out our highlights to see who else generated a buzz…

LG had gone for an extravagant, 'shock-and-awe' approach, playing up its biggest strength - the TV. At the entrance was a mesmerising huge passage filled with wall-to-wall, floor-to-ceiling OLED TVs playing incredible waterfall, glacier and sunset vision that transports you right to the location. There was no-one that didn’t get pulled into this booth.

Ford has grand plans to transform not only the way we commute but also our lifestyle.

The motoring giant used its display to show its vision of what a connected city could be like. You were greeted by a streetscape as you stepped on to the display floor where roads, cycle way and parks were set up.

There was a self-driving pizza delivery van parked in one lane and an ambulance parked on the other side. Ford wants to demonstrate how driverless cars can streamline delivery services and help small businesses grow.

Samsung was all about connecting devices to everything at this year's CES, so it completely transformed the layout of its booth to become a 'mini city' broken up into three connected districts - home, innovation and lifestyle.

Visitors walked under a huge gateway to enter the city and inside you saw different rooms featuring appliances - the Family Hub refrigerator, FlexWash washing machine and smart cooking appliances in the kitchen/laundry area, TVs in the bedroom area and the giant 146-inch 'The Wall' MicroLED modular TV and speakers in the loungeroom.

Then there was a flashy car and Virtual Reality cockpit stations demonstrating where 5G will take connectivity from the home to the road.

We also loved the MONSTER Booth…

It was the biggest Monster Products has had in a few years. With the concept cars parked right at the front of the booth with Volkswagen, Bentley and Lamborghini, they caused quite the stir. The main part of the booth housed the audio innovation for 2018 including brand new True Wireless headphones called Airlinks, a whole range of personal Bluetooth HD speakers called the Superstar Speaker Series amongst many more.

The booth also received many visits from celebrities just popping by to see the Head Monster, Noel Lee, including Joe Perry, Iggy Azalea and Stevie Wonder to name a few!

“The Wall” is a modular TV system that merges multiple borderless MicroLED TVs into one giant screen that measures up to 146 inches diagonally and can occupy an entire wall. They feature 8K resolution, and fewer panels can be used to create a TV that isn’t quite as massive. Samsung hasn’t yet announced pricing or availability for The Wall, but this is undoubtedly one of the most impressive creations yet from the world’s #1 TV maker.

The brand announced the new LG Signature OLED TV W8. This stunning 77-inch television is less than 3mm thick, and it uses a special zero-gap mounting system to hang flush on any wall. How is it possible to create a TV this thin? The internal components are housed within a connected sound bar so they don’t occupy space behind the screen like they would normally.

The W8 will be among the first TVs to be powered by LG’s new α9 Intelligent Processor, which powers the new LG ThinQ AI solution that doubles as a Google Assistant-enabled smart home hub. It also features the same great 4K OLED panel quality that has made LG a market leader.

Rumours of a Vive follow-up launching at CES sounded almost too good to be true, but that’s exactly what Taiwanese outfit HTC treated us to this year.

The new HTC Vive Pro looks set to usurp its predecessor as the world’s most premium VR headset, boasting an improved display resolution and pixel density. A redesigned head strap should make it easier to mount and unmount the Vive Pro, but probably the best bit is that HTC has confirmed it will be offering an official Vive Wireless Adapter from this summer.

The new Peloton Tread is designed in a way to optimise the live-streaming experience. The display is huge — 32 inches and beneath the display is a soundbar, for deep, surround sound. There are almost no physical buttons on the entire thing. It’s designed to envelop you in exercise content, because without it, it’s just another treadmill. Running and cross-training classes will stream live from the treadmill’s HD touchscreen; more than 7,000 classes will be available on demand. The Peloton leaderboard is also there, on the right-hand side, so you can compare your stats with others as you’re running. Not just running, but also cross-training: Peloton is now selling its own, square-shaped hand weights. The idea is that halfway through the workouts, you’re supposed to step off the treadmill and get lifting.

Monster Products caused a stir with their latest audio innovations.

The latest Clarity HDX received an award from Techlicious for the on-ear headphones integrated with Tile technology. Clarity HDX owners can just download the Tile app (for Android and iOS) and track down their lost headphones with a single tap. You'll be able to see where you last had your headphones, use a proximity meter to find them if they're within a hundred yard ran  ge, or find out if anyone else in the Tile community has spotted them. That means you'll never lose your headphones again.

For more info click here for US and here for EU.

The biggest Tech failure of the week was without a doubt the CES Blackout itself which saw large parts of the annual trade show plunged into darkness on the Wednesday because of a power outage that the event organisers blamed on heavy rain. The irony of a partial blackout at a trade show dedicated to the latest electronic technology didn’t not escape social or industry media. Parts of the convention centre were without power for up to 3 hours.

Read more about this here.