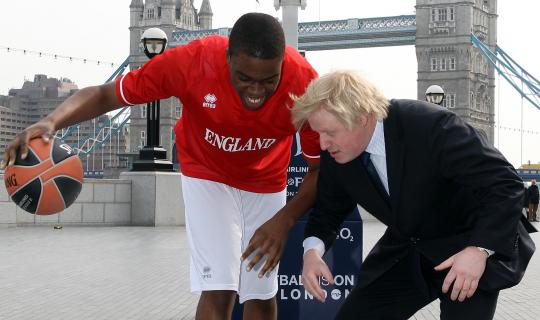 We invited the Mayor of London to take part in a stunt by the Thames this week to back the Turkish Airlines Euroleague Final Four and Fanzone coming to London's O2 Arena in May.  Boris Johnson showed off his unexpected Basketball skills shooting a few hoops and netting an unlikely backward throw trick shot.  The Mayor's throw has gone viral with over 300,000 views around the world and coverage in over 200 outlets globally.  PR gold!

We used the event to announce the free Trafalgar Square Fan Zone that takes place throughout the three days of Final Four competition and will include a basketball court in the middle of the square! The fun, family-friendly environment will entertain daily an estimated 50,000 basketball and non-basketball fans alike with a variety of interactive activities.  Euroleague's‘One Team’ initiative; a grassroots and community-led programme that will leave a lasting basketball legacy in the UK beyond the Turkish Airlines Euroleague Final Four, was also announced at the event.

The Turkish Airlines Euroleague Final Four is the signature event of the European club basketball competition, where the four best Euroleague teams of the season compete to become Euroleague champions. For the first time in history, the event will take place on UK soil, entertaining 16,000 fans per game across two days at The O2 from May 10 and 12, 2013.