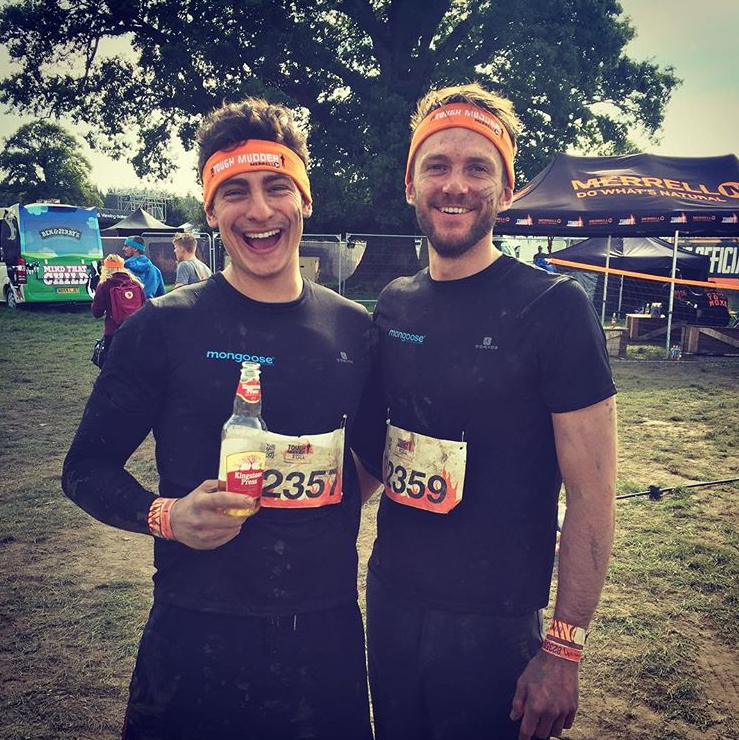 On 22nd April there will be two Mongoose employees lining up at the Virgin Money London Marathon start line to tread the gruelling 26.2 mile tarmac along with 40,000 other runners, some first timers and some old timers. But for us (James and Matt), it’s very much run and find out…

In 2016, we saw the millionth person cross the finish line of the London Marathon, so what is it that keeps drawing people in year after year? It’s certainly not the lonely, early Sunday morning runs in the rain, the monstrously large bowls of porridge or the industrial use of Vaseline. However, despite all of this, there is something mysteriously appealing about running the London Marathon; a 26 mile run shouldn’t be enjoyable, but it is.

At some point, everyone who is training for a marathon will ask themselves mid-run ‘why am I even doing this?’ You’re looking down at the pavement, the glint in your eyes has vanished along with any trace of a smile, but you keep on running.

Maybe it’s because a place in the London Marathon doesn’t come around very often – getting a place in the ballot is like gold dust. It is arguably the world’s most famous marathon, steeped in history from elite home-grown runners like Paula Radcliffe, to international legends such as Haile Gebreselassie, to champion fundraisers – who remembers the guy that took six days to complete it while dressed as a deep-sea diver?

The total sum raised by the London Marathon since it was founded in 1981 is now more than £890 million. In 2017 alone, £61.6 million was raised: the first time the event has passed the £60m barrier. This year, James and I are fundraising for Alzheimer’s Research UK, a cause that is close to our, and so many others’, hearts. Dementia is now the biggest killer in the UK and we must do more to help prevent it.

Having unsuccessfully entered both the regular and charity place ballots for the last five years running, we weren’t going to let this year’s chance slip, even if we weren’t as physically prepared as we thought. We’re two young(ish) fit(ish) lads, how hard could it be…?

Thankfully, this is Matt’s third year working with Lucozade Sport, the Virgin Money London Marathon’s official sports drink partner and long-term Mongoose client, so he’s picked up a thing or two along the way about training, hydration and mental preparation.

In fact, the help that Lucozade Sport has given along the way has made this process much easier, from securing Matt’s race place to the regular training sessions (and, of course, the copious amounts of glucose and carbohydrates that we can now consume guilt-free!).

This week, we were lucky enough to be coached by Our Parks founder, and Lucozade Sport ambassador, Born Barikor. Along with various media and friends of the agency, Born took us through an intense training session to improve speed and strength while running. Something that’s often missed with marathon training.

With all this said, marathon training is HARD. So, to help anyone else out there that is running and struggling with the training, we’ve broken down the top tips we’ve picked up along the way to help see you through it:

1       Don’t run with a hangover – unsurprisingly, it’s a lot tougher to run with the taste of Pinot Noir bouncing around in your mouth. When you’re out running, make sure you’re getting the most out of it. We like drinking with mates too, but they’ll forgive you for missing a couple of post-work beers in the name of the greater good.

2       Don’t train alone – ultimately, you have to put the miles in yourself, and it’s a long time to be at one with your thoughts – but try and find yourself a running buddy. From this office alone, 10 marathons have been run, and that comes with a great amount of experience and knowledge. Advice is everywhere when it comes to running, not just on the internet, but with the people we surround ourselves with. Learn from friends, learn from trainers, learn from experience.

3       Take fluids with you – a fairly obvious suggestion but running while dehydrated can be seriously detrimental to not only your race time, but your health. You’ll lose half a litre per hour at least, so keep yourself topped up!

4       It’s a marathon, not a sprint – don’t go too hard too early and make sure you follow a training plan. Listen to your body and you’ll be fine. Just making it to the start line, after all those miles you’ve pounded through your knees and feet is a feat in itself!

5       Roll with it – your new best friend should be a foam roller. You’ll likely live in a constant state of DOMS (delayed onset muscle soreness) anyway, so you might as well make it a little bit easier to get up from your train seat on the Monday morning commute.

Any support is appreciated. Let’s beat dementia together.

See you at the finish line,