CAN THE RYDER CUP SAVE GOLF? 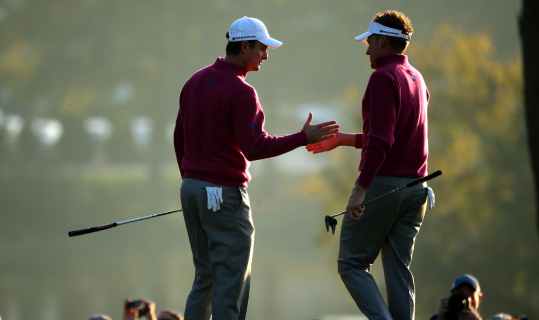 It is no secret: Golf, as a sport, is facing somewhat of a crisis.

With participation and spectator numbers rapidly plummeting, coupled with an ageing audience and the sport’s main attraction (Tiger Woods) seemingly in an irreversible decline, it doesn’t make pretty reading for one of the world’s oldest sports.

The decline amongst young players is particularly alarming with over 12,000 junior golfers abandoning the sport in the last year in Europe alone. The National Golf Federation has also reported that around 10 million people have left the game in the last 10 years, a truly staggering statistic. The sport is even struggling to maintain the same following year on year with TV ratings reportedly down 25% during this year’s Masters.

With the future of golf looking bleak, step forward the Ryder Cup.

Steeped in tradition, and providing a unique experience for spectators and sponsors alike, The Ryder Cup is different from any other golfing event in terms of its team format and commercial potential.

For the week leading up to and during the three days of competition, even those relatively apathetic to golf become the sport’s most avid fans. Offices across Europe on 1st October 2012 were awash with discussions about the ‘Miracle at Medinah’. Those who couldn’t tell you the difference between foursomes and fourballs were recounting Poulter’s magic and Kaymer’s putt at the last for weeks after Europe retained the trophy.

This appeal, and its ability to reach an audience outside of golf fans, sports fans even, is what differentiates the Ryder Cup from other golf tournaments.

In this sense, the Ryder Cup is still an ideal medium for many brands to gain the necessary exposure, even those not officially linked to the event itself. Away from the course, the battle for supremacy continues between official sponsors, player endorsers and others looking to gain cut through from arguably golf’s flagship event.

Brands not officially associated with the Ryder Cup itself have been able to be more innovative with their experiential campaigns whilst official partners, such as BMW, are shackled by their involvement and are forced to stick to more traditional media channels in order to protect the dignity and prestige of the event.

Santander were one of the first to lay their marker this week, showcasing their partnership with Rory McIlroy at Tower Bridge to promote their 123 Account.

Meanwhile Paddy Power, ever the opportunists, have also used the Ryder Cup before with their superb sky tweets campaign at Medinah in 2012. They have already posted this amusing and clever video, unlikely to be the last of their efforts this week.

Whilst the Ryder Cup presents a fantastic opportunity for brands to engage with the mass market, the fact remains that it is only bi-annual event. Innovation is crucial to the longevity of golf, not helped by the sport’s ageing traditionalists. Golf has resisted change but there is every chance that 9-hole tournaments (a la Twenty20) are something that could be successfully explored from both a commercial and engagement perspective.

Golf will certainly struggle to arrest its slump if it doesn’t at least try something new.

However the Ryder Cup is an anomaly in this sense. The uniqueness of a team competition in a year-round individual sport seems to resonate with more than just golf fans.  There is an emotional engagement with this event from both players and fans alike. And brands want to be part of the journey.

Ian Poulter perfectly embodies this raw passion and admits the Ryder Cup brings the best out in him. Surely it would be foolish of his sponsors, whether they are official partners of the Ryder Cup or not, to not capitalise on this and use their access to him to gain exposure around the biggest team competition in golf?

Poulter’s affinity with the event is not universally replicated however. Tiger Woods, whose Ryder Cup record is a blot on his decorated career, once famously said ‘we should be paid for this.’ Rory McIlroy admitted he only recently realised the importance of the Ryder Cup. But these cases are exceptions rather than rules.

Whilst the Ryder Cup is not a long term fix, what it has done is revitalised interest in the sport from major players within the sports industry. It is still arguably the biggest draw in golf and one of the most alluring and captivating events in world sport. I for one cannot wait for the action to unfold at Gleneagles this weekend.