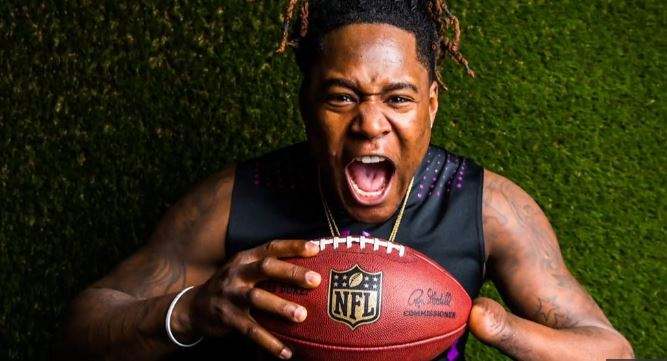 The game has changed. Forever. With the 141st pick of the 2018 NFL Draft, on Saturday 28th April, the Seattle Seahawks selected Shaquem Griffin, a one-handed linebacker out of the University of Central Florida, and in doing so showed not just every single disabled or physically impaired child but every single child in the world that anything is possible. Griffin had his left hand amputated at age four because of amniotic band syndrome, a congenital condition, and has forever been doubted or overlooked in terms of his sporting ability. At the mere age of eight Griffin was told by an opposing coach that he, “shouldn’t have been allowed to play football at all because football is for two-handed players”, and even after being a two-year starter at UCF and a first-team All-American Athletic Conference selection both seasons, the AAC's Defensive Player of the Year in 2016 and named the defensive MVP of the Peach Bowl, as well as being a linchpin in UCF's unbeaten 13-0 2017 season, he was initially not invited to the NFL Scouting Combine (where all the top college players go to complete tests in front of NFL team executives and coaches). Any two-handed player with the university success of Shaquem, would have been invited to the Combine without a second thought! The invite eventually came, and boy did Shaquem take advantage, running the fastest 40-yard dash by a line backer in 12 years and smashing out 20 reps on the 225-pound bench press. Suddenly the NFL world was listening, when they should have been listening for years. Griffin’s stock rose consistently up until Draft day with some analysts suggesting that he could even be drafted as high as the second round. Eventually the call came in the fourth round and Griffin will be reunited with his twin brother, Shaquill Griffin, a cornerback for the Seattle Seahawks, for the 2018/19 season.

The brothers have been together from the start of their footballing journey, and even chose which university to attend based on who would take both brothers (many overlooked Shaquem due to his hand). The moment Shaquem was selected sparked an incredibly emotional scene  (WARNING: tissues may be required); brothers reunited but most importantly barriers broken.

Suddenly kids around the US and the world, carrying a physical impairment, felt that their disability was not a hindrance but an opportunity. The image of Griffin walking on to the stage to receive his Seahawks hat, was an image of hope, of belief. Immediately after the Draft pick, the ‘I am Shaquem Griffin’ advert aired – bringing a tear to most watching. Regardless of how Griffin’s NFL career pans out, the impact he has already had on disability in sport cannot be measured. But it should not just be those that have a disability who are inspired – what happened on Saturday should show every single person that no matter what is put in your way, if you work hard, stay positive and believe in yourself, then anything is possible. The word “Can’t” just lost.