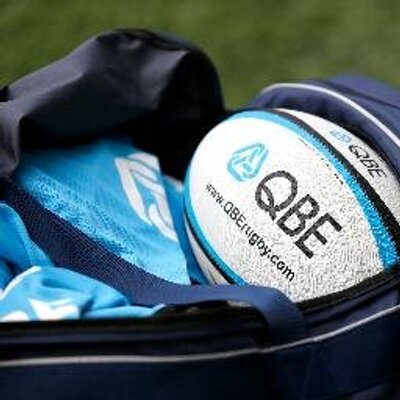 The QBE Insurance My Coach competition came to an end last week at Hornets Rugby Club in Weston-super-Mare. England winger Jonny May and 2014 Women’s Rugby World Cup winner Rochelle Clark joined us at the club to congratulate the girls’ Hornettes U13s coach Rhiannon Tottle on her My Coach win and join her on the pitch for a training session.

The two hour training session saw Jonny and Rochelle give 40 eager young girls tips and advice on mauling, rucking and tackling. A hail storm of biblical proportions might have forced everyone off the pitch but it couldn’t dampen the spirits of the England duo.

Hornettes coach Rhiannon was nominated for the QBE My Coach by Sophie Reed, one of the players she trains. The youngster put Rhiannon forward for the award as a thank you for the time and effort she puts into making the training sessions fun and enjoyable each week.

After the weather put an end to the fun filled session, everyone gathered in the clubhouse to get a selfie and autograph with their famous coaches.

Weston-super-Mare marked the last stop of our QBE My Coach tour. The competition was launched in April by England captain Chris Robshaw, who returned to his first club Warlingham RFC to take a training session alongside his old coach Steve Shortland.

Rhiannon was one of four regional winners who, over the last few weeks, welcomed a rugby legend to their club.

In November Thurrock RFC coach Dean Bennett saw 2003 Rugby World Cup winner Simon Shaw help his U15 side master the lineout, while Harlequins Director of Rugby Conor O’Shea joined in with Kent-based side Sevenoaks U17s and their coach Mike Wooldridge.

The start of December brought a visit to Burnley RUFC where U12 team coach Chris Pickles welcomed England’s Rugby World Cup winner Neil Back, who gave the young players a master-class in the breakdown.

A busy few weeks for the Generate team saw them battle wind, rain, hail and mud to help bring a special training session to more than 150 young rugby players across the country at just four of the hundreds of rugby clubs to benefit from the QBE Coaching Club.