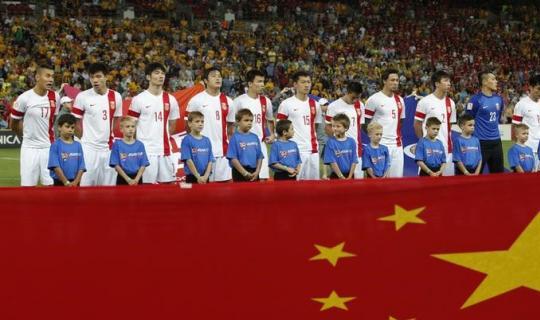 Following the Chinese government’s move to bring in a national football reform plan, China's sports minister has stated that “Football should not take the place of other sports at school” . We asked will the reform plan released by China's State Council have a big impact on football in China, and in turn global football?

Despite the large potential talent pool, China currently sits in 83rd position in the FIFA world rankings, trailing Guatemala and Honduras. Chinese football fans have become used to disappointing performances from their national team and in a country so proud of its global prominence, football is somewhat lacking. However, President of People’s Republic of China, Xi Jinping is hoping to change that.

The 50 point reform plan includes bringing football to 50,000 schools, expanding the number of stadiums and in the long term host the FIFA World Cup. The government hopes that with more funds and new facilities, China can alter the power balance in world football. Whether this is a true ambition of President Xi Jinping or merely just politics at work, this development is undoubtedly going to impact the nation’s commercial sports industry.

At the heart of the reform is the separation of the Chinese Football Association (CFA) from the government sports regulator, the General Administration for Sport, meaning the CFA will now have the power to independently manage its own finances and freely make decisions on the sports commercial future.

The Chinese Super League (CSL) has managed to entice highly-paid, world-class players like Didier Drogba and Tim Cahill, which demonstrates the league’s commercial strength and ambition. Further to that, in 2013, David Beckham was named as China’s first global football ambassador in an attempt to bring the Chinese Super League to the world stage. As the CSL grows in popularity, the league will become a bigger prospect for international brands. Western companies are just starting to switch onto the potential for growth in the vast markets of Asia. Nike’s deal with the national football team illustrates the commercial attractions of Chinese sports for sponsors, especially when you consider the national team’s current standing.

FIFA explains that even with China’s 26 million participants in football, in percentage terms the number is small when you consider the Chinese population. Therefore, it is clear that there is significant untapped market potential within Chinese football.

China’s State Council has demonstrated real ambition to make the nation a footballing power. While work is being done to make that a reality, it is still some way off. Success could take some time and effort - America has been hard at work for the last 18 years to develop their national football league, the MLS, into the thriving competition we observe today. The MLS is finally gaining traction and is now on the verge of breaking into the sanctuary of America's major league sports. Although Chinese global football domination will not take place over night, this reform plan is only going to accelerate the process!