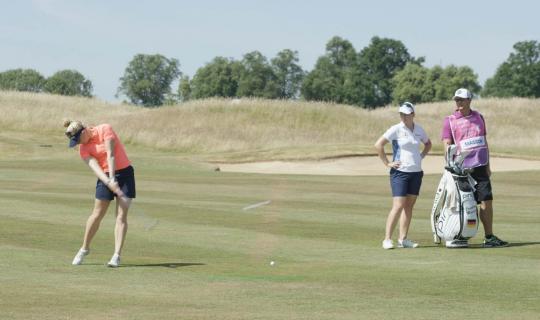 Despite there being some great female players on the world stage, such as Charley Hull, Laura Davies, Mel Reid and Paula Creamer, golf is often wrongly perceived as a Man’s game. #ThisGirlGolfs is designed to shift this perception and inspire participation by highlighting women that are already playing the game at all levels.

Golf is a game for all. Unlike any other sport, golf’s unique handicap system allows people of different abilities to play and compete together, making it a great game for women and men alike.

We have been working for England Golf alongside Sports Publications who created produced the content to drive awareness of #ThisGirlGolfs a video campaign that sets out to change female perception of golf and encourage participation.

We launched the campaign at the Ricoh Women's British Open in Turnberry, Scotland - Sorry I mean TRUMP Turnberry. Where you could argue, as the Guardian so eloquently put it, we were right royally trumped  by Donald himself, causing a storm on his Presidential promotional tour. If the media think he was a distraction and the focus should be on the great sports women playing Golf why do they give him column inches?

Be inspired visit by women golfers and get in to golf, view the video here #ThisGirlGolfs