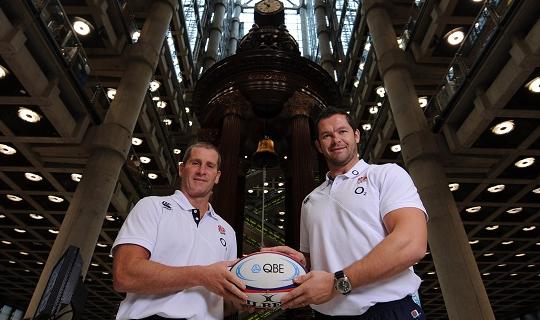 With an exciting couple of months of International rugby ahead, our QBE team kicked everything off by playing host to the England coaches and journalists, for an entertaining evening of trivia and sporting questions at the annual QBE Pub Quiz.

Lloyd’s of London then played host to Stuart Lancaster and England Backs Coach Andy Farrell yesterday, as they announced the squad that will meet in Leeds next week to prepare for the first match against Australia on Saturday, 2 November at Twickenham.

Speaking under the famous Lutine bell on the underwriting floor at Lloyd’s, Stuart Lancaster said: ‘It’s great to be here in the heart of the city to announce the squad for this QBE International Series. As a coaching team we can’t wait to go into camp next week and get the guys focused ready for three successive weeks of Test rugby.

The 2013 QBE Internationals also see England come up against Argentina, who hosted the side during a two Test summer tour back in June. England came out on top in both matches, but they will certainly not be underestimating a vastly improved Pumas side on November 9.

QBE ambassador and England forward Chris Robshaw said: ‘The Argentinians have some fantastic players and having made my debut against them I know what tough opposition they can be. It’s another big challenge for us.’

The final fixture this autumn is against the reigning World Champions New Zealand, who will be looking to reverse the fortunes of last year’s match. England outplayed the All Blacks in 2012 with a record 38 – 21 victory.

This will be the first of five encounters between the two nations ahead of the Rugby World Cup on home soil in 2015. New Zealand will be keen to get back to winning ways against England at Twickenham before they defend their World Cup crown in two years’ time.

For exclusive content from the launch and all other QBE rugby activity please visit www.QBErugby.com