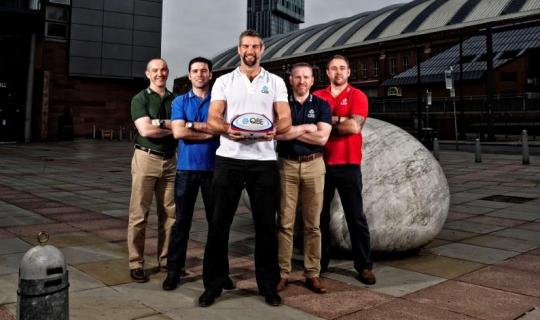 As we look forward to the biggest year of rugby, the Generate PR and Digital team headed up to Manchester for QBE’s Behind Enemy Lines event. With Manchester hosting England’s game against Uruguay at the Manchester City Stadium in October, the city was starting to buzz with rugby fever.

Hosted by Irish rugby presenter, Craig Doyle, the legends took part in a light-hearted Q&A where they looked at how each team has performed over the Six Nations so far and how 2015 is set to be the biggest year of rugby in England.

QBE is the official insurance partner of England Rugby and title sponsor of the QBE Internationals. In 2012, QBE launched the QBE Coaching Club in partnership with the Rugby Football Union to recruit and train 2,015 new level 2 rugby coaches by September 2015. The initiative aims to ensure there is sufficient quantity and quality of coaches in place to support the development of the game nationwide.

QBE’s commitment to coaching will see a 25% increase coaches nationwide so those inspired to play rugby in the Manchester area will have quality coaches on hand to teach them the game in a safe, engaging and fun way.

Here at Generate we are looking forward to seeing how the England team do in the rest of their Six Nations matches and are hoping for an England win in October.