FOOTBALL VS THEATRE: WHO WINS? 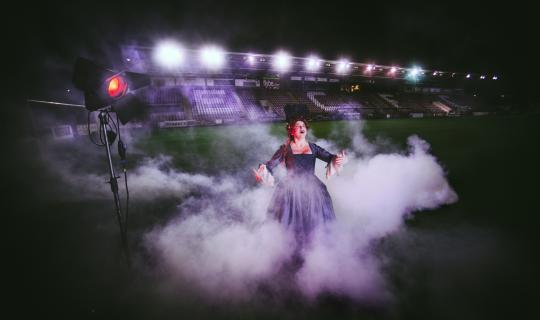 Are you sporty or arty?  I’ve spent the best part of my life trying to consolidate the two.

Trying to persuade my old football teammates to see me perform in the Camden fringe festival was like getting blood out of a stone.  Telling my fellow cast members that I had joined a hockey team virtually exorcised me from the green room.  It seemed that sport and art, two passions of mine, simply couldn’t be unified, and the idea that I could be engaged with both seemed completely alien to my peers.

Football is no stranger to the spotlight.  It maintains centre stage in spite of occasional wooden performances; the villains entering stage right on a regular basis and heroes achieving diva status.  It’s the most popular sport in the country and the Premier League is consumed on a massive global scale.

Sport accounts for 70% of sponsorship platforms and understandably so when you look at media value and viewing statistics. .  The recent fan revolt over ticket prices for the Premier League is an interesting development however.  Fans have been knocking at the door of Premier League Chief Exec Richard Scudamore to voice their disgruntlement, and journalists have been championing people power by emphasising the role fans have in the unique and enviable atmosphere created by hundreds of thousands of football supporters in UK grounds week in, week out.

There must be concern about match day attendances from all commercial football stakeholders.  The power of the live experience, seeing your heroes in the flesh and revelling in the atmosphere, spills over and directly impacts the other ways fans consume.  It has value beyond its parameters, and is why football fans continue to fork out for extortionately-priced season tickets, despite watching on a screen now more accessible than ever.

That’s also why Hamlet starring Benedict Cumberbatch sold out within hours, a year in advance of production.  In fact, that’s why theatre exists in a digital age:  Live is coveted.  Live is precious.  Live is limited.  (No need to tell the thousands of disappointed BeneBatch fans who were unable to get tickets that.)

It’s also becoming increasingly evident that cultural sponsorship is a kind of challenger brand to be reckoned with here.  For so long, creativity has been the driving force behind partnerships, content and activation – what could be more natural than to partner with a rights holder within the theatre industry?  It comes with a readymade charismatic platform, formed by the kind of creative thinking that for years now has been the bedrock of many successful sporting activations.

Gah, wouldn’t it just be amazing from a brand perspective if this amazing emotive and exclusive property were as popular as the Premier League, what a coup that’d be to gain live exposure on a creative platform of that scale.  Well, the good news is…it is!  And here is the prompt for me to write this blog.

Commissioned by the National Theatre and the Society of London Theatre, a recently published report revealed that theatre in London alone sells more tickets that the Premier League.  Way more in fact, 22 million, almost twice as many as Premier League attendances, and that doesn’t even take into account regional venues, of which there are many.

London theatre takes more at box office than London cinema.  Its commercial value in London during 2013 was more than £618m. And theatre ain’t going anywhere – it’s virtually as old as life itself (in a storytelling capacity) and the migration of Hollywood A-listers to tread the West End boards shows no sign of slowing down.  Theatre is a far cry from the stuffy, moth eaten, opera glasses days of yore; it’s just getting started.

It has the emotion, it has the assets and what it lacks in global media television coverage, it makes up with the wide reaching opportunity for direct access to consumers.  And let’s face it, globally televised sporting events are filled up with the usual sponsorship suspects for the most part anyway.  What a joy to find a clean platform.  I’ve loved watching the ‘Tate’ becoming a globally recognised brand and the Southbank successfully separate and expand their assets.  I’m excited to see what the commercially cultural world has in store next.

So, which camp are you – sport or the arts?  The sponsorship savvy amongst us should all be answering ‘both’.  In fact, why aren’t more of us saying ‘both’? Music, theatre, cinema have long been considered under the umbrella term “entertainment”. But hang on, aren’t we always hearing that sports stars are in the “entertainment” business as well? Maybe I should go back to my football and theatre mates and let them know that these two interests of mine aren’t too dissimilar after all.