FORMULA ONE: THE SPONSORSHIP BATTLE 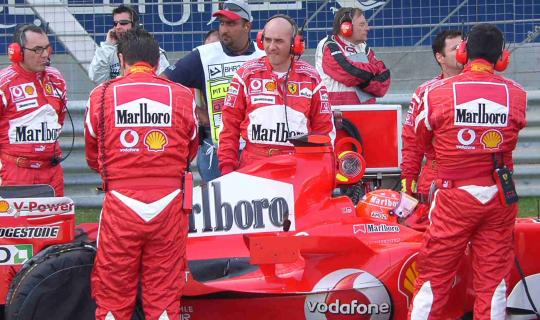 In case you hadn’t heard, Formula One is in a bit of trouble. The stories have been well documented this season, and my colleague Camilla Barlow had a look at what might be next for the sport.

Formula One’s troubles can be dated back to when tobacco sponsorship was banned across Europe. Gone are the days when Malboro and Benson & Hedges were emblazoned on team cars and attire, and with it went one of the sport’s biggest sponsor revenue streams. Recent efforts have been made to revamp the sport – hybrids, turbos, double points for the final race – but unfortunately no industry has taken up the responsibility of sponsoring F1.

The cost to sponsor an F1 team now is frightening, so much so that potential suitors are scared off. Of course sponsors still exist, but when Marussia and Caterham protest against the distribution of prize money, mainly created by race approval fees and track advertising, it makes you wonder where all the sponsors are.

Sponsorship makes up roughly 40% of a team’s budget, with prize winnings around 35% and the rest coming from owners, and as prize money continues to rocket the gap between the two has lessened – the 2014 pay-out is around the $800million, up from $250million five years ago. Obviously the more successful teams will receive the bulk of this, but it is difficult to put blame on Ecclestone for the financial fiasco some teams find themselves in.

As far as the negotiations go, whatever teams do in order to bring one brand into their grasps, they have fierce competition waiting from commercial rights holders. Some of the major sponsorship deals in F1 history were thought to be as a title sponsor with a team, such as Emirates and LG, however changed to become a sponsorship deal for Formula One as a whole overnight.

The teams at the front of the grid gain more coverage as a whole to those at the back, therefore sponsoring a front runner will gain more TV exposure, however the teams are unable to offer a title sponsor the same amount of guaranteed coverage as the commercial rights holder. No rear wing branding would be able to possibly compete with track side advertising seen my millions around the globe, hence sponsoring Formula One as a sport is a much preferred option than even sponsoring some of the big names like Mercedes and Red Bull.

Vodafone decided to terminate their title sponsorship with McLaren after the board felt it had maximised their partnership. The financial climate today is a challenging one for teams as brands are careful with their budgets, so eliminating sponsorship from their outgoings is naturally an easy decision.

Companies want a good value for their money when they are investing and only commercial rights holder can guarantee exposure through advertising on the track and its control of television feeds. This shows that it is difficult for teams to compete but hopefully we will see more sponsors return to the sport. At the moment it feels like it’s simpler to acquire F1 for more pay-out than it has been to actually pursue sponsors and sell the teams as marketing vehicles for potential sponsors.