THE FUTURE LOOKS BRIGHT FOR RUGBY, BUT JUST HOW BRIGHT? 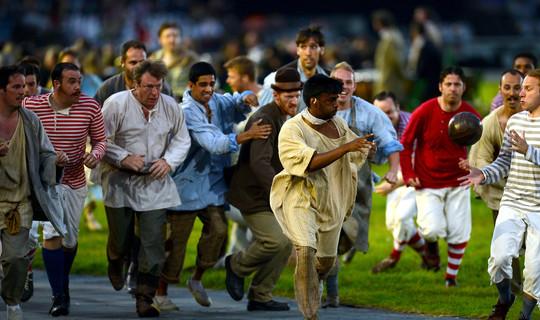 People are far too willing to believe everything they read. The red-tops are eager to feed our insatiable appetites with hyperbolised information and it is easy to get carried away. We must be cautious.

With the approach of a Rugby World Cup in England in 2015, the addition of the 7’s format to the Olympic sports roster in Rio and an unprecedented new domestic television deal in place, the sport is riding on a wave of optimism. But is such optimism founded?

Rugby remains relatively fledgling in a professional sense in relation to other major sports, and still suffers commercially because of this. The game turned professional as late as after the 1995 World Cup, when the IRB removed all restrictions on payments and benefits. This was a move designed to expand the game as well as rid the threat of shamateurism. Tennis, however, was a pro sport by 1968, Cricket by 1962 in the UK and as for Football, professionalism was introduced as early as the 1870s.

BT Vision’s new 4-year deal with the PRL to show domestic and European matches is reportedly worth up to £152m and represents a lucrative and groundbreaking package (a 50% increase on Sky and ESPN’s previous deals), although clubs will hope there isn’t a knock-on effect in their split from Sky who greatly helped them in the early years of professionalism by insisting that 30% of their deals with the RFU went directly to top flight teams.

Yet annual television revenues for Rugby Union still fall slightly short of Sky’s offering to Formula 1, and are way off the kind of sums that the domestic Football rights attract. The combined £3.018 billion deal agreed between Sky, BT Vision and the Premier League shows just how much the already enormous gulf between Football and every other mainstream European sport continues to widen.

In 2011, sponsors paid a total of $887m into Formula 1, a far greater figure than for Rugby; and Rugby players do not receive the same sorts of lucrative deals from sponsors to sportsmen involved, for example, on the European and US Golf tour or on the ATP circuit. Financial and commercial incentives to Rugby players remain smaller than to those in these other commercially-vying sports.

Player salaries are also dwarfed when compared to top-level athletes in other sports (including all major US sports), and are limited in the UK by a salary cap (of £4.5m plus add-ons). This has been cited as one of the main reasons top English players are looking abroad (to France especially) for better deals.

Then there is the problem of maximising engagement with a target audience. The 6 Nations are currently the only free-to-air England International fixtures on the calendar, and since the general population’s access to Sky is still relatively limited that means International rugby has a limited viewing audience, and thus exposure for sponsors is severely restricted. The popularity of the sport in the UK as a whole seems dependent on the England team’s success, with peaks during the International fixtures that are not sustained throughout the rest of the domestic season.

As a sport, Rugby is yet to attain a truly global status and will struggle to break into emergent high-growth markets. China and Brazil are a long way off embracing the 15’s format, while there is little chance of it being embraced in the US in the foreseeable future, largely due to the unrelenting popularity of the NFL.

To see a real breakthrough in commercial opportunity and popularity, Rugby may be in need of an overhaul similar to that undergone by Cricket when it introduced the 20/20 format in 2003. This continues to bear fruit in greatly increasing the excitement and commercial attraction of the sport. It is difficult to see how Rugby’s format could be adapted, though the emergence of 7’s Rugby on a global stage could help with rebranding efforts. With the long-term future of the largest European competition, the Heineken Cup, uncertain, and nominal interest in the second-tier European competition, the Amlin Cup, European club rugby could do with a refreshing new look.

Ultimately, the fundamental issue remains that with limited access to rugby coaching in UK schools (the sport is widely played for at least a term in private schools, but generally football is the more popular and accessible choice for kids throughout the year) participation rates will continue to be inhibited. Rugby must make itself more attractive for new generations of children – the future of the sport is in their hands, so to speak. The lack of investment in grassroots Rugby, especially in comparison to Football, coupled to recent government funding cuts can only worsen the situation in the short-term.

Over-optimism is, for now, jumping the gun and forms part of the inevitable rush to sensationalise coverage of an already popular sport. Broadcasters and sponsors are of course keen to make bold claims. In reality, Rugby will simply continue to grow at a steady rate of progress. The World Cup in England and inclusion of 7’s in the Olympics will certainly help grow the popularity of the sport, and provide a platform to showcase Rugby to the rest of the world – an opportunity that the IRB must capitalise on. Fan experiences at major tournaments are crucial, and the IRB would do well to take a leaf out of FIFA’s book in providing dedicated ‘Fan Zones’ seen in host cities at World Cup events.  Don’t hold your breath for a ‘revolutionary’ breakthrough though.

The key now for Rugby lies in playing to its strengths. These include upholding the admirable respect shown by opposing players to each other and to referees and in maintaining the image of players being upstanding role models to their fans. It is essential that the new TV money is spent wisely, and that means investing in better coaching, academy development and intelligent global marketing campaigns. It must also remain relatively scandal-free. There has already been bad press over the decisions made for the long list of potential venues for the World Cup, and tournament organisers will be hoping that the unfriendly sentiments don’t linger. The damage being done to cycling is unfolding before our eyes in the wake of the Lance Armstrong doping scandal, something especially disappointing given the shot in the arm it received from a wonderful summer of sport.