A GOLDEN ERA FOR WOMEN’S SPORT 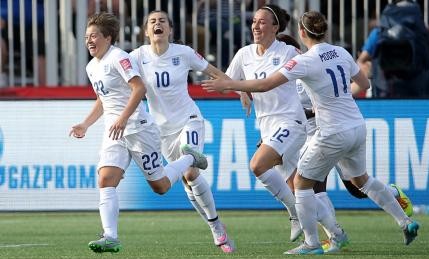 After the success of both the England’s Women’s rugby union and cricket teams, becoming World Champions and winning back-to-back Ashes series respectively, it is safe to say that the achievements of England’s women is at an all-time high; and the Women’s Football team have not  disappointed either.

Known to their fans as the ‘Lionesses’, the England Women’s Football team, managed to attract a television audience of over 1.6 million during their quarter final game against hosts, Canada, despite the game being aired at 00:30 BST, and in their heart breaking loss to Japan in the semi-final, they pulled in a whopping 2.4 million viewers. This is a spectacular feat and triumph for the sport which was effectively banned in the 1920’s after the FA dubbed it as “quite unsuitable for females”.

The World Cup, however, has proved to these millions of viewers that football is far more than suitable for women. Some have even remarked that the girls actually have a ‘more honest’ approach to the sport than their male counterparts, who still earn more in two weeks than the entire women’s side receive in a year! The clear lack of self-entitlement and preciousness the women’s team show has helped them eclipse Wayne Rooney’s side when it comes to success in major tournaments, and has acted as a catalyst of the team’s current rise to recognition and fame. You only have to look out for Vauxhall’s advert to see how the women have become the household football names after their watershed moment.

While the World Cup has helped make much needed progress in the recognition of the women’s game, contrasts between men and women are still being made. We must acknowledge however, that we are dealing with two completely different games. While the sport may be the same, the style is different and therefore it is unfair to constantly make comparisons between the two, as it will only be to the detriment of women’s football development. The relentless assessment of what the women are doing differently to their male peer’s only reinforces pre-existing stereotypes. It’s a fact that men are faster, stronger and more athletic; but what the women may lack in this department, they make up for in skill, passion and most importantly teamwork. The games are adapted as a result of the physiological differences between the two genders. The tactics that are employed by the women, such as shorter passes, have been modified from the men’s game, acting to replace the strength imbalance between the two. The World Cup has taken huge steps in challenging the misconceptions of female athletes’ abilities and will hopefully help to increase female participation throughout all sports.

Although the majority of media coverage surrounding the Women’s World Cup has focused on the comparative obscurity of the women’s game to the mildly obsessive nature of men’s football, there is an evident need to discuss the overriding success that this year’s tournament has been in raising awareness of women’s sport. Even with less investment into the production of coverage, with fewer angles and a continuing lack of instant replays, this World Cup has broken viewing records across the globe; it is predicted that over 1 billion people will have tuned in to watch the World Cup by Sunday’s final. Even FIFA’s Women’s World Cup Facebook page has seen a 97% increase in its followers to over half a million, despite the current controversy surrounding the governing body and male dominated management and bias.

Several initiatives and schemes have recently been introduced that look to address the problem of female participation and the lack of appreciation of Women in Sport. The FA’s #WeCanPlay campaign is encouraging these projects in terms of football, hoping to boost the Women’s game to the UK’s 2nd largest participation sport by 2018 from its current position in 4th. With the outstanding viewing figures that the women brought in, there is no doubt in my mind that female football participation is going to be a changed game forever, and this will hopefully improve participation for women’s sport in general.

For now we should all be congratulating the women on becoming England’s 3rd most successful football team of all time!