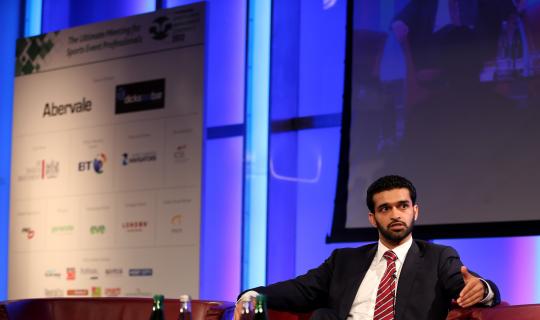 Al-Thawadi said that success so far is due to the establishment of the Supreme Committee which makes sure each element of organisation coincides from the legacy to the delivery of the event.

When asked how legacy plans were progressing he said, “Delivering on the legacy for the event is part and parcel of all other elements of the event – from the design to the build, legacy is considered at all times and with ten years to go until the event, we have enough time to make sure we are delivering on this.”

Al-Thawadi said that a grassroots programme is in place, with investment being made in local leagues and the Aspire Academy.

“Qatar’s national team aims to qualify for the 2014 World Cup and by 2022 we will have a team who will have made an honourable appearance in a World Cup,” said Al-Thawadi.

Al-Thawadi emphasised that one of the keys to the success of the Qatar 2022 World Cup is building a ‘knowledge-based economy’ and using the event as an opportunity to train engineers, event managers and operational staff who will help deliver the event.

When asked whether he is confident of filling the stadia, Al-Thawadi said, “I have no fear on this issue. Qataris are passionate about the World Cup already and now it’s on their doorstep. Attendance will not be an issue as Qatar is centrally located and easily accessible for international fans too.  This event is not just about Qatar – it’s about the Middle East as well - bridging the gap between East and West.  Culture will be a large part of the experience so there will be plenty for fans to do as well as watch football.”

For further information on the International Sports Event Management Conference 2012 go to www.sportseventmanagement.co.uk and follow #ISEM2012 on Twitter.