HEAVYWEIGHT BOXING: BATTLE OF THE BROADCASTERS? 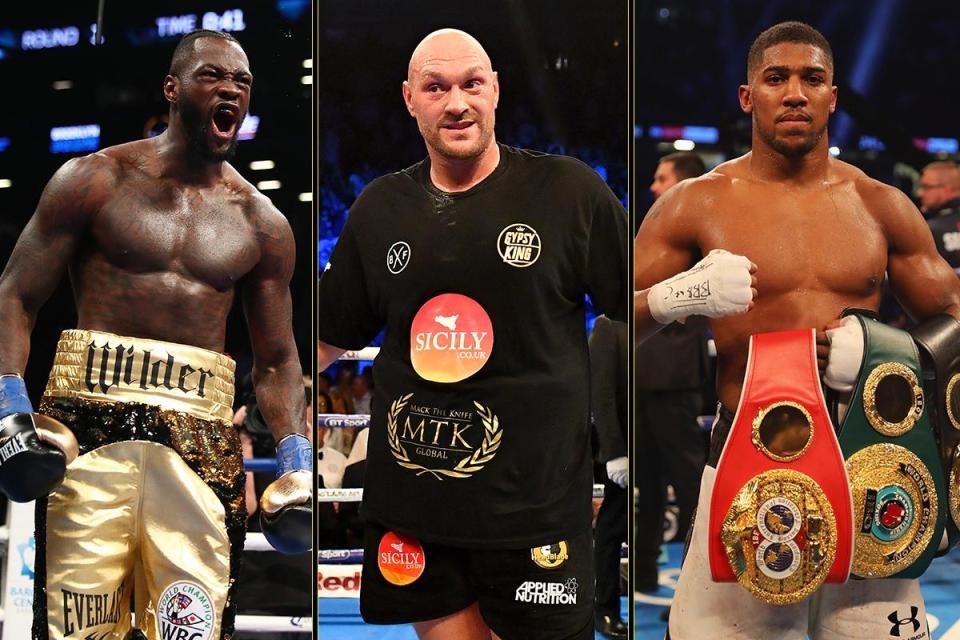 The heavyweight boxing scene is alive and full of big players & big politics.

Anthony Joshua continues to bring an interest in the sport back to the mainstream, and boxing’s real golden boy is making huge leaps in & out of the ring, however it’s not just AJ who’s at the top of tree now. The return of Tyson Fury has captured minds and emotions to some extent. Three years ago, Fury was notoriously in a mess, through drugs, alcohol and food abuse - But in 2018 Fury went on an impressive journey to change his life around and saw him back in the ring and straight to the top when he controversially drew (probably should have won) with WBC heavyweight champion Deontay Wilder.

Wilder, known for his knockout power, has also had to face critics due to his unorthodox style but with two top heavyweights now on his 40 fight resume following his fight draw against Tyson Fury and his March 2018 victory over respected Cuban Luis Ortiz - his stock is rising in American minds.

However, with three top heavyweights all believing they should be number one, calls for them to fight each other are louder than ever. Obviously, Fury and Wilder have already got it on once, but as the party is just getting started, are the politics or "poli-tricks" of boxing going to cause blockades along the way.

Negotiations between rival promoters will always bring an element of challenge, especially when two world champions believe they are worth a certain value (and rightly so!). Anthony Joshua and Deontay Wilder have already had negotiations break down at least twice, the first being when AJ turned down an apparent $50 Million offer from Team Wilder to fight in America. Then Wilder returned the favour and turned down an offer to fight in UK too.

But outside of promotor ego’s, and battles over the lion share of the money, another key factor is already showing in the early part of 2019, that it may as well be the fourth heavyweight at the top – it’s the power of the broadcaster.

All three top heavyweights are signed or at least aligned with different broadcasters in the UK & USA;

*Whist Wilder has not signed a deal with ITV, his management PBC are in partnership with the broadcaster

So, what are the implications of this? Well it's clear it doesn’t make it any easier for the fans to see the big fights they desire.

Broadcasters play a major part in determining when and who a boxer fights - particularly when you’re at the elite end of the sport. And to drive viewership, broadcast networks spend big to attain the best rights & talent for their platform. You can see this through some of the biggest deals in recent years - Floyd Mayweather famously received $200 million for his six-fight deal with Showtime, and more recently Canelo Alvarez will bank $365 Million for an 11-fight deal with the newly launched OTT platform DAZN. So, with huge money spinning around, you can see why broadcasters would not be keen for their prime assets to pop off and fight on a rivals TV network.

Just a couple weeks ago Tyson Fury and Deontay Wilder's rematch negotiations fell through, following Fury signing a five-fight deal with US network ESPN, reportedly worth $80 million. Now with the previous fight having taken place on rival network, Showtime (A network which has been investing in Deontay Wilder for a number of years now), it automatically caused problems and ultimately led to EPSN opting for Fury to fight someone else in the States, before hopefully returning to negotiations for this desired rematch.

Of course, there are many more examples of tales such as this, and unfortunately there will be many more to come – just think of a potential match-up between Anthony Joshua & Tyson Fury. Here you’d possibly have the biggest fight in British history, but you’d also see Sky Sports vs BT Sport battling it out to secure the fight on their platform. Although history suggests that whilst these broadcast wars can be real challenges – when everyone wants to play ball & the big money is on the table – things will get done. You just have to look at the 2015 mega-fight between Floyd Mayweather & Manny Pacquiao, which was first attempted in 2010, but it took five years to eventually get it off the mark and was a co-production with rival US networks Showtime (Mayweather) & HBO (Pacquiao)

So as fans, we want to see the biggest fights, but naturally in the sport of boxing the politics are such a massive part of the game. In most other sports negotiations tend to stay away from public eye and deals are made almost in secret but in boxing it seems like the world knows every offer which is sent from one camp to another – which for fanatics like me is great, but is such openness great for getting things done?

My hope is that in this heavyweight generation we’ll get to see the mega-fights happening two-fold, and I reckon in this digital age where fan’s voices are louder than ever – it will only help make this case, even if the guys in the boardroom will have a few sleepless nights.