HOW DO YOU SOLVE A PROBLEM LIKE MANCHESTER UNITED? 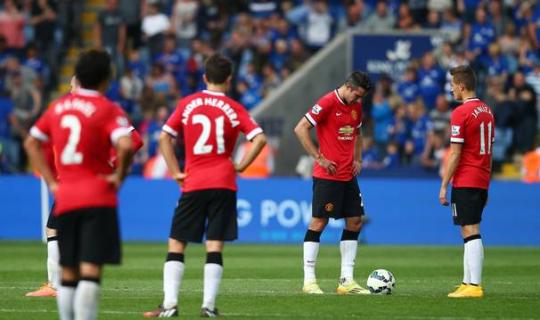 Manchester United, the Marmite of world football, have caused as much joy as they have distress since Sir Alex Ferguson hung up his hairdryer in May 2013. Whilst some sit gleefully watching United unravel after enduring years of ‘Fergie time’ heartache, red supporters are left speechless and a little meek by what has happened to their beloved team.

Whatever your feelings towards the club, it was an alien experience for a football fan to see the Champions League fixtures unravel this week without the red side of Manchester present.

With financial justification of increasing importance, with FIFA Financial Fair Play demands and vigorous internal scrutiny, it is interesting to consider what the consequences of a season without European football are for Manchester United. Has the loss of Champions League and European football altogether made them financially and commercially vulnerable?

The club itself has openly revealed that their failure to qualify for the Champions League this season will cost them more than £40m; which in literal Luis-Van-Gaal-transfer-terms translates to approximately a Luke Shaw and a Daley Blind. Hardly pocket money even in football’s crazy world.

It is also no secret that United have spent inconceivable amounts of money recently, and ex-player turned commentator Phil Neville believes that a similar level of spending is required over the next two transfer windows.

I recently spoke to Russ Williams from Rock and Roll Football and Barclays Manager and Player of the Month panel member who stated that ““Manchester United will continue to attract the attention of world class players (as they have with Falcao and Di Maria) but at a considerable and inflated price”. With all this money going out of the account, United fans will hope there is still enough money in the bank to get what they actually need next time around; a dependable and proved centre back, whilst the United board will be mindful of the need to be financially accountable.

However, the main question they should be considering is how much is too much given the critical nature of their current league standing and potential lack of Champions League football to line the coffers next season.

What might come as a surprise is that compared to cross-town rivals Manchester City and Chelsea the Red Devils are only now really starting to compete when it comes to transfer spending: 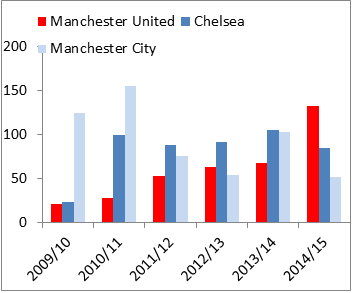 As the most profitable club in England and arguably one of the most profitable brands in the world, their delayed willingness to splash big money does seem to be the only missing part of an otherwise exemplary commercial strategy (and a testament to the previous strength of their squad).

However, commercial strategies are still reliant on having a saleable and sought after brand and therefore suddenly Manchester United’s transfer spending becomes a fundamental piece in the club’s overall season strategy whereby a top 3 finish is expected.

The club have spent years cultivating their global brand through a savvy commercial strategy that relies on innovation and creativity as well as a targeted market driven approach.

That being said, United’s on-pitch performances of late could end up having a significant negative impact on the brand.

United’s commercial appeal is, at the moment, heavily reliant on its historical success and has allowed the club to develop an astonishing 35 different sponsorship deals and agreements with 11 telecommunications partnerships.

Whilst there is the potential for such a large number of sponsorship deals to reach a saturation point at which the tangible and even intangible value of associating with such a prestigious football club becomes almost negligible given the amount of brands vying for attention, this does not seem to be a cause for concern…yet.

Sponsorship can provide a direct platform of communication to United’s ever growing global fanbase whose support and loyalty becomes increasingly important as pitch frailties emerge.

United have arguably largest fanbase of any sports team in the world with a purported 659 million followers. To put that into context that is double the population of the USA or 10x that of the UK. They are going to need the support of every fan however as they face a tricky few years trying to establish themselves back amongst the Premier League big boys.

Russ Williams went on to say that “Manchester United will not struggle to attract new sponsors in the next few seasons as they are arguably the biggest football brand in the world, however the value and quality of the brands they sign up may well be reduced if the club fails to qualify for European football over the next two seasons”.

Manchester United’s world record sponsorship deals with both Chevrolet and adidas are further testament of how the club will look to drive their commercial successes in order to supplement lost Champions League revenue.  Whilst the Chevrolet deal was penned in 2012, adidas did not complete until July this year meaning that they must be relatively confident of a quick return to glory.

The adidas deal does however include a clause stating that the value of the contract would drop by 30% if Manchester United fail to qualify for the Champions League for two consecutive seasons…perhaps a lesson learnt from their 27 year relationship with Liverpool FC whereby a lack of consistent European football was widely cited as one of the main reasons for the termination of the kit supplier deal.

It has recently emerged that the club will look to fill the void (both in terms of matchday revenue as well as the drop in exposure across TV broadcasts) of European football by arranging abroad mid-week fixtures, once again an example of innovative thinking that has helped Manchester United keep one step ahead. However, there must be questions around whether there is enough strength and depth in the club that had one fit centre back for their clash with West Ham.

The clubs’ innovation and determination to become a brand in their own right suggests that they will fight back from the mid-table standing they currently find themselves in, and the sheer depth and loyalty of their global fanbase should allow them a season’s grace to rebuild.

To find out more about our sponsorship consultancy head here

To find out more about Rock & Roll Football head to http://www.absoluteradio.co.uk/football/