Home > News > INTERNATIONAL RUGBY LEAGUE… IS IT A BACK SEAT PASSENGER TO THE CLUB GAME?

INTERNATIONAL RUGBY LEAGUE… IS IT A BACK SEAT PASSENGER TO THE CLUB GAME? 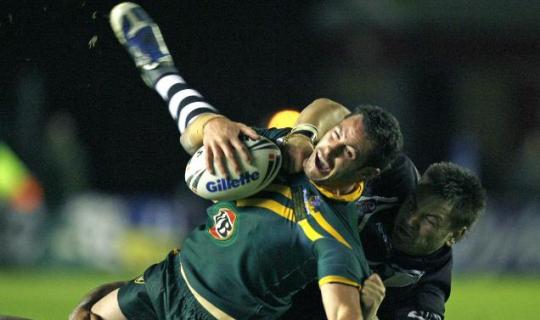 At no point in this article, about Rugby League, will I make any comparisons to Rugby Union. Promise.

This weekend sees the beginning of the Four Nations tournament, with England opening in Brisbane against Samoa on Saturday. In the other opening tie Australia are playing their good pals New Zealand in a repeat of the 2013 World Cup final. In that match at Old Trafford, the Australians gave the New Zealanders a masterclass in rugby, winning 34-2 to claim their 10th Rugby League World Cup title.

Are you excited yet?

Well let me temper your excitement for one moment. Before I continue, I should direct you to my colleague Sam Hurley’s article on the troubles Rugby League faces from a few weeks back. In the piece, Sam observes that the sport has its foundings and its strongest fan base in the north of England.

The piece raises a question: If club Rugby League is predominantly a northern sport, does that have a negative impact on the perception of International Rugby in this country?

I got in touch with RFL’s senior Commercial Manager Gary Linke, who gave me his own personal thoughts…

“Whilst Rugby League clubs draw their support predominantly from their local communities, interest in the sport extends regionally and nationally through the high quality coverage that Super League and the Challenge Cup enjoys on Sky Sports and the BBC.  But international competition fires the imagination of the world.

Almost 12 months ago, the semi-finals of the Rugby League World Cup at Wembley Stadium saw three million people tune in to the BBC to watch England play New Zealand in one of the most dramatic and captivating displays of sporting theatre this country has ever witnessed.  Leading going in to the last minute, England looked to be on course for the final until Shaun Johnson broke home hearts with a last-gasp try for the Kiwis.

England may not have reached the final, but last year's tournament firmly re-ignited the international game after five years of steady progress since the previous World Cup in Australia in 2008.

In the five-year intervening period, domestic competition took centre stage in both the NRL and Super League with international Rugby League appearing to take a secondary position in both markets, with the notable exception of Australia's State of Origin, a tournament which remains the highlight of that nation's sporting calendar.

Here in the UK, the World Cup experience has left an indelible mark on the sport and the players who featured in the tournament, many of whom will be the stars of Super League as it enters a new era in 2015. From next season, the competition for trophies will be even more intense throughout a domestic calendar that features a succession of exhilarating highs.

Should Rugby League be concerned that its club competition has more appeal than the international game? Less so than English football should be concerned. Why? Because Rugby League is in rude health domestically and, having just delivered the most successful World Cup in its history, now stands at the threshold of an exciting chapter in its history.

In February, three of Australia's top club sides, including champions South Sydney, will face English opposition in a newly-extended World Club Series; in May the focus switches to St James' Park in Newcastle and the unique event that is Magic Weekend; and, of course, Rugby League will head back to Wembley for the Challenge Cup final in late August.

Add to this an innovative new structure that involves the sport's top two divisions splitting into three pools, the Super 8s, in late summer; the return of promotion and relegation; and an epic Grand Final at Old Trafford, and you have the ingredients for a domestic season to remember. And then New Zealand arrive for a three-match series against England next autumn.

The strength of Super League is shaped by events like the World Cup, the Kiwi tour and the World Club Series: their experiences in the cut and thrust of the international arena improves players as athletes and raises their profile to new heights.

Those increases and improvements will continue with the help of a 10-year international calendar put forward by the Chairman of the sport's International Federation, Nigel Wood, the RFL Chief Executive who helped mastermind the World Cup.

Better domestic competition breeds better international players: with structures now in place to deliver on both fronts, Rugby League has every reason to look forward with confidence and hope.

You can’t deny Gary’s passion for Rugby League, nor can you deny that the RFL seem to have a plan that they’re sticking to. It is a growing sport, and is building foundations at club level in the aim that that will then boost the sport at international level – but is that all they’re doing?

No, they aren’t sitting on their laurels; recently Nigel Wood attempted to revive the Lions tours, which hasn’t been seen since 2007, only to see it knocked back by the Australians due to timing clashes. Nigel is convinced that the desire is there for a Lions tour and that it will happen again in the near future.

In the meantime, we’ll just have to settle watching the three best teams in the world, (and Samoa) battle it out in the Four Nations.

Now you can be excited.