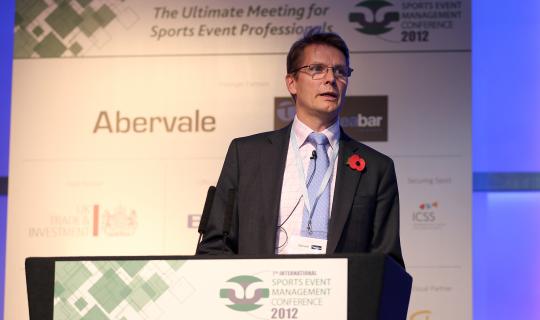 The International Sports Event Management Conference 2012 (ISEM) started today in London, with LOCOG’s James Bulley,  Director of Venues and Olympic Park, and Andrew Amery, Head of Security, discussing the challenges faced in planning, managing and delivering a successful Olympics games.  With 60% of visits to the London 2012 website channelled through mobile communication, the emergence of social media and mobile communications were an important challenge to deliver for the Games, with the advancements in technology since Beijing making it the most connected Games in history.  This consideration was highlighted by the panel to Rio 2016 that it needs to be as equally prepared.

Howard Dickel, Programme Director, BT Global Services, who also took part in the panel discussion said, “We knew an emergence in social media was coming but we didn’t know how it was going to hit.  It would be very different from Beijing.”

“We had to deliver the best spectator experience and with mobile technology and social media moving forward at an incredible rate and with people expecting high speed internet, we had to build the world’s largest high density, high speed internet network in the Olympic Park.”

“Another key consideration was security. With more mobile devices available, this presented us with a risk of cyber security issues so we had to ensure we were prepared for this.  We also had to make sure that to make the Games more mobile, the event still looked good and that antennas and communications equipment wasn’t visible.”

“Social media in 2016 will be different again so it’s important that there is flexibility and Rio is prepared for the unknown,” said Dickel.

Additional areas of London 2012’s event management were discussed including security and the stadium facility.

LOCOG’s Head of Security Andrew Amery said, “There were a number of security challenges around the Games such as the pre-Games weather as we were unable to set-up security when planned as the overlay couldn’t go down.  The G4S issues came as shock at the last moment.  We are still in negotiations about closure of the contract.  Key to the overall success of the security was that we were honest publicly.  Our national strategy was published on the Home Office website and this helped build international confidence that London would deliver a safe and successful games.”