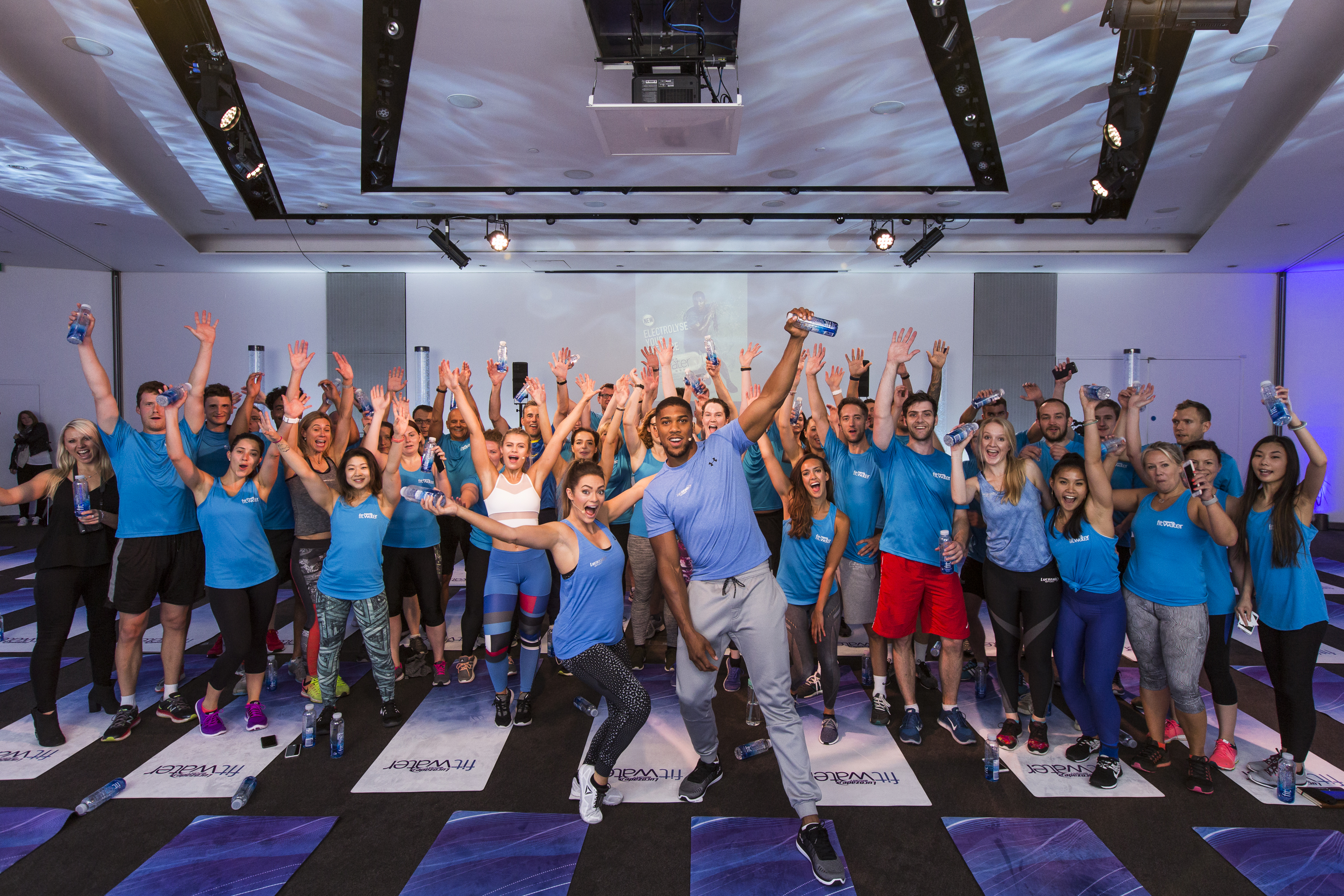 Taking on the bottled water industry is thirsty work. Or seemingly so after the excitement of our workout session with Anthony Joshua and Emily Skye at last week’s FitWater launch event…

Lucozade Sport is shaking up the bottled water industry with the unveiling of FitWater – a new “functional water”, charged with electrolytes, targeted at people with a fitness-inspired lifestyle.

The launch of FitWater is the culmination of a two-year journey for the brand after research showed that exercise is evolving and people are doing less intense exercise more frequently. It’s been designed to help replace what is lost when we sweat; on average people lose half a litre of fluid over a 30min period of exercise, and as a result, displace key electrolytes in various amounts. FitWater is formulated with magnesium to help reduce feelings of tiredness and fatigue, calcium to help normalise muscle function, and sodium and chloride to help you replenish what you lose in sweat.

The brand has recognised that its target audience is changing and adapting its fitness lifestyle and has responded accordingly; looking to reach a broader group of people doing less intense training, not purely endurance sport that has been at the core of the Lucozade Sport audience for so long.

This was brought to life at last week’s media launch event, which saw British Boxing legend, Joshua join forces with Australian fitness icon, Emily Skye, to lead an immersive group workout for an array of journalists, bloggers and influencers in the health & fitness space, to introduce the product and put it to the hydration benefits to the test. We had – for perhaps the first time – a perfect ratio of male and female bods, demonstrating the appeal of both the big time brand ambassadors, and how this can be so integral to the success of a launch, as well as the new product appeal itself.

Joshua commented, “Lucozade Sport are committed to getting people moving and I am really pleased to be a part of it. Hydration is absolutely key for any athlete and I am no exception so adding FitWater into the mix of Lucozade Sport products I use is a big bonus for me.”

And Skye agreed: “I have been working closely with Lucozade Sport to produce a water that’s formulated for exercise. My followers will know that in the past I have made my own electrolyte infused water so it’s incredible to see Lucozade Sport producing one that’s scientifically formulated for everyone to easily enjoy – and it tastes much better than mine!”

The substance that falls from the air, springs from the earth and comes out of the tap has become a hyperactive multibillion-dollar business - over the past two decades, bottled water has become the fastest growing drinks market in the world. The global market was valued at $157bn in 2013, and is expected to reach $280bn by 2020. In 2015, in the UK alone, consumption of water drinks grew by 8.2%, equating to a retail value of more than £2.5bn.

Lucozade Sport has also carefully positioned itself in the space that exists between function and aspiration – we’ve seen the celebs papped with countless Glacéau Smartwaters poking out of gym-bags, airport carry-ons, clenched in fists on dog-walks but why? For a larger sized bottle of the thirst-quenching stuff and some blue packaging. They’ve ticked the aspiration box with some clever adverts and endorsement, but on this side of the pond Lucozade Sport looks set to have nailed the product functionality for the fitness-minded – in this cynical consumer age, that makes all the difference.