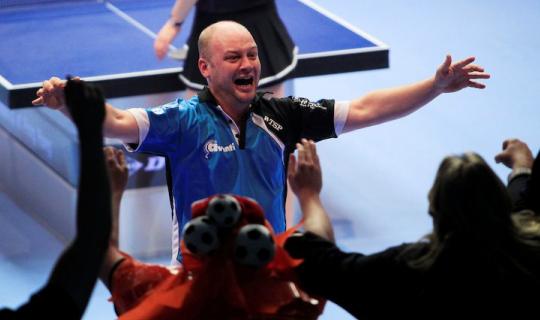 Barry Hearn's fondness for spicing up sports has taken him from darts to snooker and now on to the unlikely destination of the world’s most favourite game table tennis. With the World Championship of Ping Pong being his latest creation, so what is it? It looks like table tennis, however players are unable to use their own bats! Instead they are randomly assigned one at the start of a match. The paddle area of the bats have a sand paper covering, as opposed to the pimpled rubber and foam on modern day table tennis bats, the intention is to reduce speed and spin and increasing rally length. In terms of the gimmicks players can use a double point ball once every match - with the chance of winning two points. The championship will also get the Barry Hearn makeover to make it appeal to the masses and $100,00 prize money to appeal to the players.

Recently table tennis was hit by the news that the sport would receive no UK Sport funding towards Rio 2016. However the grassroots of the sport are strong in the UK, Sport England's funding increased from £10.4m to £11m for 2013-2017 and almost 100,000 people are picking up a bat at least once a week. With table tennis tables popping up in parks around the UK and table tennis focused bars like Ping and Bounce becoming a social craze the interest in the sport is on the rise.

The World Championship of Ping Pong aim is to catapult ping pong into the big league and onto the international television stage. Currently Dunlop is the only major sponsor and has a one year deal as the official equipment supplier of the event to test the water. With a broadcasting deal on Sky and an increasing grass roots participation could brands look at ping pong as the new darts?