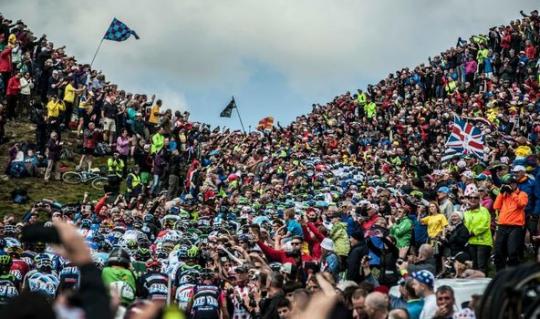 In case you hadn’t heard, the Tour de France kicked off in Yorkshire over the weekend.

British Tour de France starts have previously been met with a sense of bewilderment, almost a slight inconvenience to grumble about. However the thing is that we are now quite good at professional cycling, with Team Sky, fuelled by an open and clean mantra in what many still see as a dirty sport, producing two British winners in as many years.

With this, the sport’s popularity amongst the country’s more amateur riders has shot through the roof and shows no sign of abating. You only have to look at the fervour created by 2.5 million spectators along Yorkshire’s roads over the weekend, or indeed just a flick through the nationals, to know that Britain is now cycling mad. Indeed, a study by ctc found that almost half of those living in Cambridge, Monday’s stage departure host, cycle to work at least three times a week.

However, as this article by former Head of Cycling at BSkyB Steve Beckett superbly discusses, professional cycling is failing to truly capitalise on the sport’s popularity from a commercial point of view, and should be doing so much more with the opportunities on its doorstep.

The author suggests steps that cycling can take to professionalise itself further, such as financial fair play rules similar to the ones that pinched the bums of Manchester City and PSG recently and a better relationship between broadcast media and professional cycling, which all sound great in principal.

Whether or not the much-maligned UCI, no doubt still reeling from a generation of doping scandals and the catastrophic presidential reigns of Hein Verbruggen and Pat McQuaid, can act accordingly and drag cycling into the modern professional world remains to be seen.

Check out the latest work from our PR & Activation team here