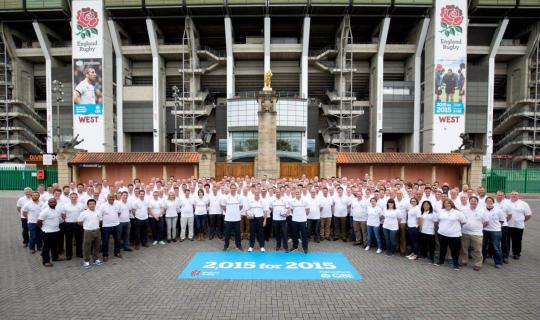 Thursday 6 August: Today, QBE Insurance, in partnership with the Rugby Football Union (RFU), has announced that the QBE Coaching Club programme, an initiative to recruit and train 2,015 new Level 2 rugby coaches has reached its milestone.

The programme was established to ensure the game in England has enough quality coaches to welcome new players and encourage them to stay within the sport. England Head Coach, Stuart Lancaster commented “the 2,015 new QBE coaches will have a fundamental impact on grassroots rugby in this country. It’s a fantastic initiative and an incredible legacy to leave.”

Thanks to QBE’s commitment and investment, the initiative has increased the number of Level 2 coaches in England by 25%. The 2,015 coaches trained through the QBE Coaching Club will positively impact 50,000 players across the country. Over the next four years over one million hours of coaching will be delivered by QBE coaches, which if it were being paid for would equate to £20 million. 96% of coaches work alongside other coaches, so it is expected that there will be a knowledge transfer from the 2,015 QBE coaches to over 4,000 other coaches across the country, increasing the overall impact of the QBE Coaching Club on community rugby.

RFU Rugby Development Director Steve Grainger said: “This is such an exciting year for rugby and we’re delighted to have achieved our target, working with QBE Insurance, of recruiting and training 2,015 new Level 2 coaches. We put this programme in place back in 2012 because coaching is a crucial factor in developing, sustaining and increasing participation in our sport. With the world cup here in England the spotlight will be on rugby and we want to ensure that we have enough coaches in place to deal with what we hope will be an influx of new players into rugby. This success will be an important factor in helping to continue to grow rugby across the nation.”

Richard Pryce, Chief Executive Officer at QBE commented “QBE Insurance has worked in partnership with the RFU to develop the QBE Coaching Club – a 2015 legacy programme to mitigate the risk of not having a quality coaching infrastructure in place that helps keep players in the game. We are proud to announce that we have now recruited and trained 2,015 new Level 2 coaches for 2015 and that these new coaches will help to capture young players, keeping them engaged through quality coaching and in turn help to improve long term participation in the sport.”

Hannah Haywood, a QBE coach said “Coaching has always been a passion of mine. I decided to take the QBE Coaching Club course when the ladies team at my local club were struggling to find a coach. I decided to become qualified and coach the team myself. The 2,015 for 2015 initiative is great. Coaching courses can be expensive, especially as so many have an upfront cost. As the course has been funded by QBE Insurance, it means it’s so much more accessible to those who would like to learn how to coach and help teach the next generation of players.”