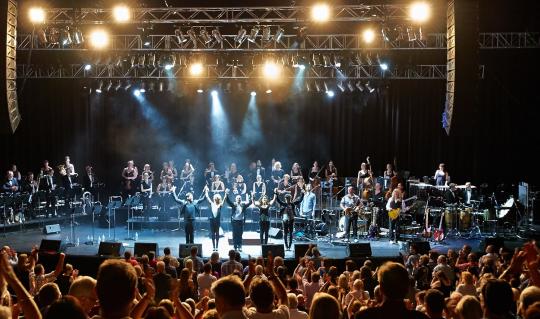 I started discussions with the Australian promoter about two years ago now to see if we could bring my Queen Rock & Symphonic concert to Australia. The show features a cast of stars from international productions of We Will Rock You and is a concert of Queen's greatest hits, performed with rock band plus symphony orchestra to create a truly epic scale production.

Richard Sidwell (arranger and conductor) have worked together for many years and have enjoyed some amazing experiences producing and performing the show together. When I called him to say we'd been invited to take the show to the Sydney Opera House he didn't believe me and took a bit of time to be convinced I was being serious.

So our journey began to produce the shows. With the logistics involved we decided to assemble an international cast of singers and to use a rock band made up of entirely Australian musicians. With some great contacts in Australia I'd soon assembled a great line up of musicians for our rock band and was lucky to be able to get two of the world's greatest rock guitarists on board - James Barber and Simon Croft. These two players were hand picked by Brian May to perform in the Australian production of We Will Rock You and Brian was so impressed with them that he flew them over to the UK to play in the UK and European touring productions. The other players were highly recommended and our final line up comprised players from Perth, Melbourne, Brisbane and Sydney.

For our singers I went straight to two world class performers I've worked with previously- Mig Ayesa (from New York) and Carly Thomas Smith (from Los Angeles). To these I added two Australian musical theatre stars who have both starred in the UK production of We Will Rock You - Michael Falzon and Amanda Harris.

To make sure everyone was ready for the show we turned to the magic of technology - everyone had access to all the music via dropbox and we got to work with each of them via Skype before we'd even set foot on the plane.

Incorporating over 60 people on stage this concert is technically one of the most complex I've ever worked on and the preparation of the technical production is absolutely crucial. Despite the challenge of completely different time zones I managed to make sure that everyone was clear about what was required to make this concert work to its maximum potential.

Richard and I arrived in Sydney on Feb 4; had our first day's rehearsal with the band and singers on Feb 5; our first rehearsal with Sydney Symphony Orchestra on Feb 6 and our first show at the Opera House on Feb 7. To go from meeting everyone for the first time to performing our first show at the Opera House within three days was pretty incredible and to get a standing ovation after our first sold out show was one of the best feelings I've ever experienced as a producer. Our other two shows were also sold out and also received standing ovations. It was actually quite amusing that - by the final show - the word had obviously spread that our first 'encore' was We Will Rock You and the audience were already stamping their feet and clapping the drum track as the cast came back on stage. What an amazing experience.

From Sydney we went on to Perth and had an amazing time working with the Perth Symphony Orchestra. Never before have we had an orchestra so enthusiastic about performing a rock show! Our first concert was to a sell out crowd of 8,000 people at the Joondalup Golf & Country Club. Another amazing night; another standing ovation. Our 'Valentine's' night concert was at the Riverside Theatre, Perth. Another great night (sad to say by now we'd all become used to the standing ovations!). Our final concert in Western Australia was on Feb 15 in Mandurah and that was particularly special as it was also my birthday. By that time we'd all come to realise we'd been a part of something quite extraordinary. The response from the audiences and critics alike had been amazing and we'd all seen the fantastic comments left by the fans on our 'Music Of Queen' facebook page (incidentally now No.1 hit on google search).

Our final standing ovation was quite emotional. End of tour and birthday celebrations followed and we were all sad it was over. However, we've already been invited back with dates in Melbourne and Brisbane in the mix, plus the possibility of further dates across Asia.

As I said to to the cast on our final night: 'We came, we played, we conquered.' It's experiences like that which make all the hard work worthwhile.