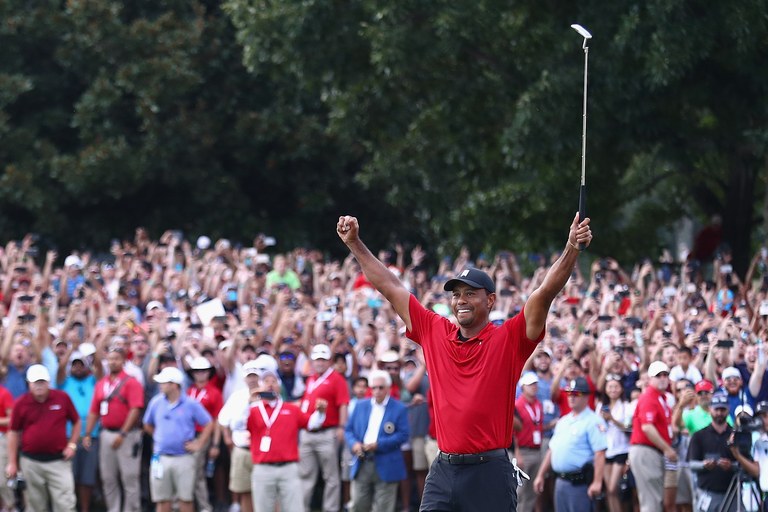 As we approach the final stages of Ryder Cup planning with excitable captains making concluding adjustments to their tactics – the small suburb town of Guyancourt is suddenly flooded with a noise louder than they could have ever anticipated for hosting a golf tournament.

Not only because the greatest team event in golf is on their doorstep, but because of the warming vocal chords of American fans practicing their screams of ‘GET IN THE HOLE’ ready for the first tee!

The GOAT is back – defying the odds once again to produce his 80th tour win last Sunday at East Lake. Even though I’ll be rooting for team Europe to wrestle back the Ryder Cup, I’m incredibly excited to see him prowl the fairways once again.

A year ago, he could barely walk, let alone swing a club – held together by four back surgeries. With serious doubts whether he would ever be able to play again, it went from bad to worse in August 2017 when ‘that picture’ emerged on the news that made every golf fan in the world wince. He was charged with a DUI with five different drugs found in his system. Tiger had hit rock bottom.

At a time when golf was being overtaken in popularity in the UK by cycling and other recreational sports – golf needed its talisman. Other emerging superstars, although bringing in birdies, weren’t bringing in the viewing figures to grow the game.

But a few months on, Tiger started showing promise again and fans began to believe once more. Viewing fans and ticket sales began to increase and the red shirt of Sunday, started appearing in the final pairings.

Come the final event in the FedEx cup and a Sunday where Tiger tees off with a three-shot lead. Not in 24 out of 24 Sunday starts with a three or more-shot lead has Tiger not won. Surely he wouldn’t disappoint.

Five years on from his last victory, a new Tiger rolled in the put on 18 to take the two-shot victory and announce his return as the greatest of all time. By all means not quite back to his best, but certainly back to a level capable of going toe to toe with anyone else in the game.

This was something special, but what does it do for the game - surely only golf fans are interested? No.

The Golf Channel announced that final round coverage on NBC drew a 5.21 overnight rating, up 206% from 2017, making it the highest non-major PGA Tour broadcast of 2018. Streaming was also way up, as you would expect: the final round of the Tour Championship resulted in 18.4 million minutes streamed, up a colossal 561% from last year. That makes it the most-streamed Sunday round on NBC’s family of networks since they started streaming in 2013. How can one man still increase a viewing figure by 561%?

It was clear that the hype was something special with commentators noting they’d never seen anything like the crowds he pulled in. The rockstar of golf made the 18th green look like something from a Beatles appearance in the 60s.  Whether modern golf has been built on his legacy or not, players of both sides of the Ryder Cup were present at East Lake to clap him in and those not in attendance blew kisses on social media. Every tour player, every golf fan and every sports fan should be thankful for what he has achieved on the course.

During his prime years, Woods was a focused, solitary figure, able to communicate with few players and the media only through that fixed-veneer smile, giving nothing away and inviting nobody in. Now 42, he is said to be a different person than when he won his 14th and last major 10 years ago. Finding a partner for Woods used to be a challenge, but he now has a queue of younger players begging to tee up with him on Friday.

It doesn’t look good for team Europe which need a second Miracle of Medinah moment to bring back a trophy they haven’t lost on home soil since 1993.

Cheering them on, we can only hope that Tiger brings his traditional poor Ryder Cup record with him – but fresh off a win, fuelled with the spirit of a game he so nearly lost, I’m praying again for some magic dust from Seve.