THE ROAD TO WORLD CUP GLORY IS WIDE OPEN 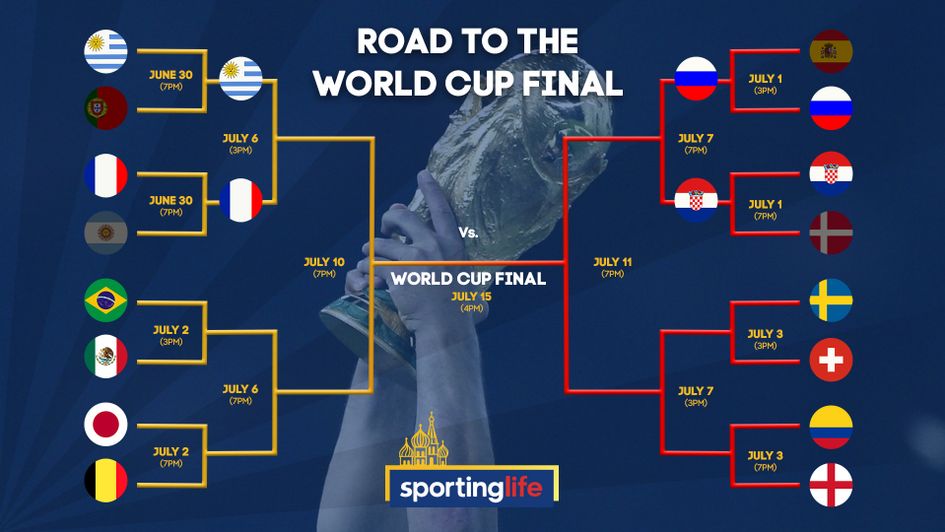 What a time to be alive! 48 matches and two glorious weeks later, we’re at the knock-out stages of the 2018 World Cup. It’s been an absolute thriller to date, even Russia’s thumping of Saudi Arabia made sensational viewing and a once-in-a-lifetime insight into OPEC’s boardroom.

Fasten your seatbelts, start looking at flights to Russia… Football is Coming Home. Gareth Southgate and his world-class manners showed his tactical nous in England’s defeat to Belgium. Despite not winning a knockout fixture in the Euros or World Cup in over twelve years, he has the whole nation believing. In defeat, England have escaped, the current 7/2 favourites, Brazil in the quarter finals but now face a Colombian side who will be hoping that James Rodriguez can recover in time for Tuesday. The dreamers are already thinking about facing either Switzerland or Sweden in the quarters and a World Cup run not seen since Mike Bassett and his England team.

Brazil have a tricky encounter against Mexico in the last-sixteen. The Mexican team includes the veteran Rafael Marquez who is only the fourth player to appear at five World Cups when he came on as a substitute in his country’s shock win against Germany. The player’s presence in Russia has caused a few problems for Fifa due to his name being on the US Treasury Department blacklist for alleged involvement in assisting a drug trafficking suspect.

The issue lies in the competition’s major sponsors. Because of the nature of the regulations that accompany his blacklisting, he can’t be pictured in the presence of the World Cup’s American sponsors which include Budweiser, Coca-Cola, MacDonalds and Visa. The severity of the restrictions are such that he has been allocated his own bottle and training jersey in order to avoid wearing branded clothing or drinking Powerade, the sports drink owned by Coca-Cola. Similarly, team flights have been carefully considered because Marquez is barred from travelling on American-owned aircrafts.

Germany’s Leroy Sane has been sitting comfortably as a series of lacklustre displays meant that the 2014 champions finished bottom of Group F. Chaos ensued on social media. “AHAHAHAHAHAHAHAHAHA..." read a tweet from Fox Sports Brasil that ran to 272 characters.

It was almost as if the Adidas CEO, Kasper Rorsted had set expectations on the evening of Germany’s fateful exit. Having signed a new contract with the Deutscher Fußball-Bund (DFB) for roughly €50m per year in 2016, Kasper that evening expressed concern over FIFA’s decision to increase the World Cup competition from 48 teams from the current 32 starting in 2026. “When everything becomes commercial and no longer emotional, then soccer fans will switch off,” he said. The next day Germany lost 2-0 to South Korea, losing Adidas an estimated $32m in revenue.

Kylian Mbappe came of age in Kazan with a stunning second half double to fire France into the World Cup quarter finals, leaving Lionel Messi’s Argentina heading home. France are now 4/1 to lift the trophy but I’m sticking to my guns and going for Belgium to win the World Cup and Lukaku to be top scorer which has been moved from 80/1 to 14/1. The Red Devils have already scored 9 goals in the group stages and I wouldn’t be surprised if Lukaku, Hazard, Mertens and Co notch up a few more this evening.