IS RUGBY LEAGUE IN TROUBLE? 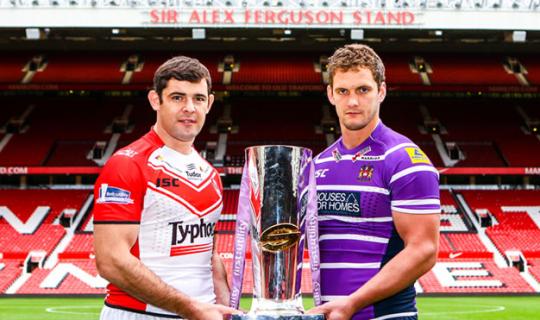 St Helens and Wigan hate each other. They absolutely despise each other. It is one of world sport’s oldest, most bitter and greatest rivalries.

What there is though, is a mutual respect between the two town sides separated by a mere ten miles, and it’s set to be a firecracking humdinging ripsnorter of a clash between Super League’s two standout teams this season.

As is customary, the end of a season brings about a time of reflection and a look forward to the future. What is next for the quite wonderful yet quirky sport of rugby league?

On the face of it, Super League is in somewhat of a stagnant state. The main contenders  have been the main contenders for many seasons, the Challenge Cup final at Wembley again failed to sell out this year and failed to reach the previous two year’s attendances. There was nothing particularly new or ground-breaking about this season.

Whilst the Barclays Premier League discussed fixtures abroad and Rugby Union, like a flashier, more popular twin brother shook up its European club competition with a brand spanking new European Champions Cup, Rugby League went about its business in its usual unfussy way.

The question is, should Rugby League be doing more to progress?

Well that depends on what Rugby League wants to do as a sport.

Rugby League has always lived, for better or worse, by its comparison to Rugby Union. A somewhat unfair comparison given the difference both in money involved and participants between the sports. But the similarity between League and Union, and the number of cross-code stars make comparisons inevitable.

Union reigns over League in terms of attendances, turnover and worldwide popularity, and is therefore more attractive commercially: Over the years it has pinched League’s best talents with the lure of money, worldwide travel and ultimately more prestigious international competition. Just this week Sam Burgess, arguably the best player of either code in the world, played his last match of League in search of greater things in Union.

There also remains a feeling that rugby league is incredibly localised to Yorkshire and Lancashire: This shows little sign of abating, with attempts to drip feed the sport’s popularity into other areas of the UK being at best deficient. At grassroots level, Rugby League is an alien concept to schools further south than Widnes and further north than Leeds, and you would be hard pressed to find a club with a strong junior section outside of the rose counties stronghold.

Attempts to launch a competitive London-based Super League side make perfect sense commercially, however the London Broncos/Harlequins Rugby League venture has fitted and started ever since its inception. Let’s not mention the (Celtic) Crusaders Welsh adventure which was beset by scandal after scandal before grinding to a halt merely two years after joining the sport’s premier division.

Those who argue that a Super League franchise can be built outside the north of England will point to the success of Catalan Dragons, who overcame Super League giants Leeds in this year’s play offs. The Dragons were hardly built from scratch however and joined the Super League after outgrowing the minimal competition in France.

However, is the sport’s heavy concentration in Yorkshire and Lancashire necessarily a bad thing? Rugby League’s association with traditional working-class towns like St Helens, Wigan and Castleford is what gives the sport its identity, with an atmosphere to rival football without the nastiness.

Surely Rugby League’s way of remaining a commercial success is not to try and expand into an area where it’s fighting a losing battle, swimming against a southern stream of rugby union, football and cricket, but to sell this identity to a wider audience?

Super League has something good going on. Rugby League is the toughest team sport in the world, with its sheer physical demands unrivalled – just ask cross-code star Gareth Thomas.

It has its target audience, and a passionate vocal one at that. A trip down to Headingley in Leeds or Castleford’s jungle shows you how league have some of the most fervent sports fans in the world. And a sport’s popularity in the region isn’t entirely dependable on a major club’s prevalence there.

The comparisons to Union are unlikely to go away, and without seismic changes that would take years to transpire League is unlikely to compete as a worldwide superpower.

However as a game it is easier to follow, far quicker and with a higher skill level than its counterpart

Maybe it doesn’t need to change.