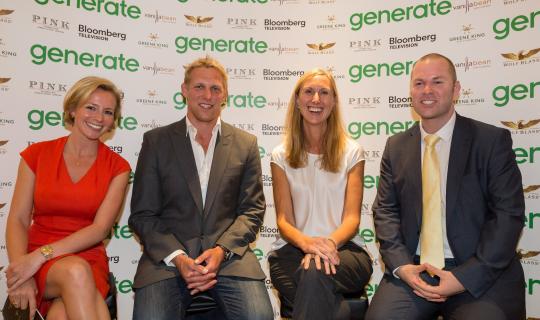 Last Thursday Generate hosted their inaugural Rugby Thursday Therapy at Thomas Pink’s outstanding Mayfair store. With a year to go until the Rugby World Cup begins in England and excitement steadily building, those in the rugby business gathered for an evening of drinks, food and discussion around the great sport that is rugby union.

As part of the event, an expert panel was set up to discuss some of the key commercial opportunities for brands in the lead up, and during the World Cup. Fantastically chaired by Bloomberg TV Presenter Caroline Hyde, the panel consisted of Ex-England rugby captain and veteran of three world cups Lewis Moody MBE, QBE Sponsorship Manager Nick Mott and Join In CEO Rebecca Birkbeck.

Lewis Moody MBE gave the audience some fantastic insight into how special it is to be involved in a World Cup as a player, as well as their commercial obligations in the run up to, and during, the tournament. As Sponsorship Manager of QBE, the insurance specialist who sponsor the England Rugby Team and QBE Internationals, Nick Mott discussed the advantages for a company becoming involved in rugby. Rebecca Birkbeck talked about the process of sourcing volunteers for the tournament and their roles when it takes place.

See below for some fantastic images from the evening!