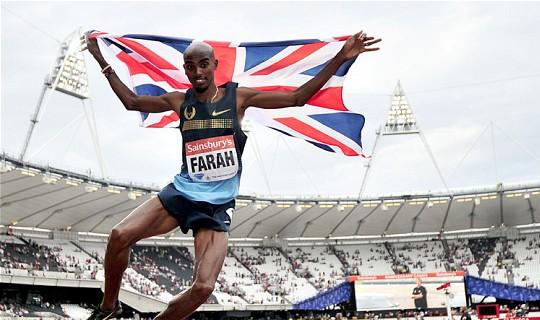 You’d be forgiven for thinking the Olympics was back a year later. It was, except this time it was branded Sainsbury’s. Good Sainsbury’s branding that got media cut though too; from billboards, to race numbers to interview boards to swaths of orange in the crowd. All backed up by a longstanding previous investment in grass roots sport prior to London 2012.

Well done Sainsbury’s for being the first across the line (with the exception of BP and Glasgow 2014) in what should have been a fierce battle to maintain the hearts and minds of the British public post London 2012. Unfortunately it is not, with too few Olympic sponsors maintaining the momentum from the Olympics to date. Whether this changes remains to be seen over the next few years but it does indicate short term attitude by many if the sponsors and their boardrooms.

Currently their loss is Sainsbury’s gain.

Further to the blog above I found Sainsbury’s CEO Justin King’s comments in The Sunday Telegraph article by Graham Ruddick http://www.telegraph.co.uk/finance/newsbysector/retailandconsumer/10206558/Sainsburys-to-reap-more-sponsorship-gold-at-Olympic-Anniversary-Games.html most interesting.

‘In almost 10 years as CEO, has King made a more high-impact decision than for the company to sponsor the Paralympics?

“If you are asking could you name another single decision that we have made as a company that was more unexpectedly impactful beyond the actual decision itself, then no, I think there probably hasn’t been in recent times,” the 52-year-old said. “I think you would have to go back to things like the decision we made to go self-service in the 1950s, those kind of decisions were pivotal in changing the nature of the business that we were. In my time it is probably the single biggest decision that turned out bigger and better than we expected it to be.”

King says the decision to sponsor the Paralympics has left the Sainsbury’s brand is in a “warmer place than it has ever been”, which is quite a statement for a company founded 144 years ago and which ruled the grocery industry until the rise of Tesco in the 1990s. “Customers are saying: 'We think you stand for values and what is important is that you don’t just say that, we see real evidence that you live by them’,” King adds.

This is borne out by Sainsbury’s results. In the year to March 16, like-for-like sales rose by 1.8pc. During a similar period, its main rival, Tesco, saw like-for-likes drop 0.6pc and profits fall for the first time in two decades. The Paralympics struck a chord with the nation, helping to shift perceptions of disabled people in the UK. As the first company to only sponsor the Paralympics and not the Olympics too, Sainsbury’s will be forever associated with the event and the feel-good summer of 2012.

Sainsbury’s is back at the Olympic Stadium this weekend as the sponsor of the Anniversary Games. Sainsbury’s staff and customers will be watching the likes of Usain Bolt from the stand, while volunteers will help to lead athletes on to the track.

King, himself an enthusiastic sports fan, says this weekend will help to build on the momentum created within the UK and Sainsbury’s by the events of last summer. He is a committed believer in the lasting legacy of the events.

Although the sun may be helping Sainsbury’s sales, King insists the company’s involvement with the Paralympics was not about immediately boosting sales, and he struggles to quantify the direct impact of London 2012 on the business.