TAKING OVER THE WORLD ONE TWEET AT A TIME! 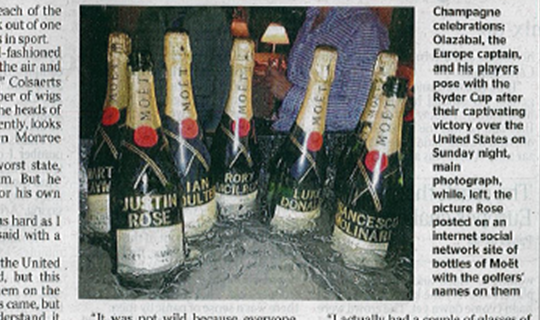 As we know, we live in a society where celebrity endorsement is king. In previous years celebrity endorsement was restricted to above the line tactics such as advertising campaigns and PR launches, however with the uses of Twitter brands can now reach consumers in their homes, on their phones and even at work  through celebrities on Twitter bringing the brand to the heart of your daily reads.

However the power of Twitter does not just stop there, it’s now consuming the media we read as well as the social lives we live online! Every time I read a paper or open the latest glossy magazine, I see branded images that have been recently tweeted by the hottest star on the Twitter list. Is PR becoming a simple case of getting celebs to tweet images of brands to secure a place in the headlines? Is this what Twitter was really created for and is now forming the media powerhouse that it was meant to be? A perfect example was in The Times today.

Buried in the heart of an article about the Masters is a large branded Moet & Chandon image from the celebrations, tweeted by a wife of one of the players. Do we really think she tweeted this for fun? Or was this a PR tactic? If so, is this the way PR is now moving, and do we have to adapt to secure that million dollar image?