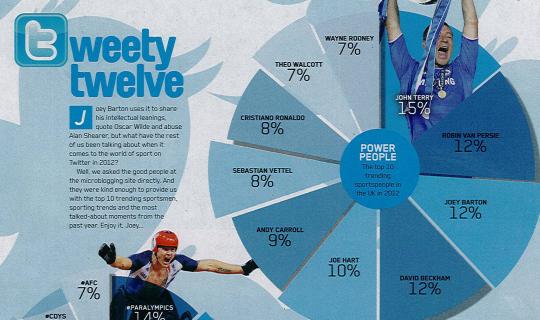 This week twitter announced its most tweeted moments in the UK of 2012. With over 500 million users worldwide, generating over 340 million tweets per day, twitter has officially taken the world by storm.

So what was the most tweeted moment of 2012? Of course it was the Olympics, but not any of our gold medal winning, record breaking Team GB athletes but in fact Boris Johnson shaking his hips to the Spice Girls at the London Olympics Closing Ceremony. In its entirety, the 16 day Olympics generated the biggest cyber conversation of the year with 150 million tweets across the globe. Not surprising considering it was the biggest sporting event in the world and UK in 2012. What is perhaps more astonishing is that the #Paralympics tipped the #Olympics as the most tweeted sport trend of the year.

Twitter also announced the top 10 trending sportspeople in the UK. Given its popularity this was dominated by football stars with Sebestian Vettel the only feature outside of England’s most participated sport.

As sporting events become increasingly global, more consumers watch these events via TV and online and as a result there is an increasing desire to pursue an instant reaction to a sporting event through channels such as twitter.