WHAT IS THE REAL IMPACT OF FACEBOOK AND GOOGLE ON SPONSORSHIP? 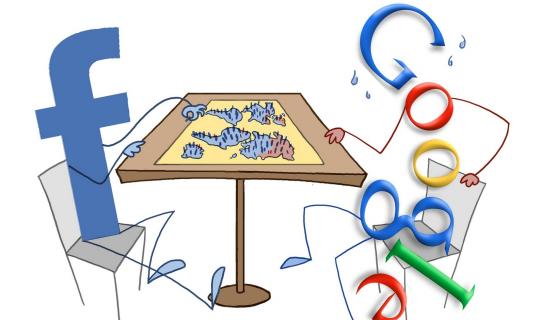 According to an Accenture CMO survey, 70% of advertising is set to be digital in the near future, changing the advertising and therefore sponsorship industry forever.

Now there is a new breed of media owners in tech giants such as Google and Facebook, who with ever deeper pockets are bringing the cost of technology and communication down.

Pre digital, advertising / media buying was seen as untargeted and doomed. Sponsorship was also seen as the future: Cutting through clutter, bypassing on-demand TV (you couldn’t fast forward the pitch side hoarding) and targeting specific audiences against their interests.

However Facebook and Google offer highly targeted customer acquisition where a specific demographic, with specific interests, within a specific geography can be served content specific to their interests.  Wasn’t this what sponsorship did?

However, as always the advertising industry has evolved its offering with (quite simply) … ‘digital advertising’ and customer acquisition (digital direct marketing?).

The opportunity (or threat)

I always saw sponsorship and digital as a marriage made in heaven. Sponsorship has engaging content and highly interested people in that content. Digital and social media is a platform for finding or sharing content that people are interested in. Without the content, the platform was nothing. Suddenly sponsorship could reach beyond the actual physical event or broadcast and be consumed 24/7. But the industry has been very slow to respond and must surely catch up before what was seen as an opportunity becomes a threat.

The cost of a digital campaign is low and they are very targeted.

Sponsorship loves ‘big numbers’ yet the world is increasingly becoming more specific and more targeted. An estimated 750 + million people watched the FIFA World Cup, a big number for sure but what about the actual cut though of this exposure and the target audience wastage. With partners paying in the region of $25m to $45m+ per year (over four years) to battle it out with each other for share of voice I wonder how this stacks up as a cost per acquisition exercise vs Facebook?

Do I want to pay for eye balls or pay per click?

By benchmarking itself against advertising for so long sponsorship has lost its identity and risks being devalued as a result. Whilst advertising has evolved and reinvented its self as content creation and distribution, sponsorship needs to remember what it was – an engagement platform. Once it does it will thrive but it needs to wean itself off media ROI

The argument surely persists that content is king but with ever deeper pockets, will digital advertisers start to ambush events digitally via fan engagement programs ultimately driven by the fans?

Will the digital / tech revolution drive down the cost of sponsorship rights and activation? Does the next Heineken Star Player really need UEFA, the next Castrol Index really need Fifa? One thing is for sure the cost of acquisition would have been significantly lower without the rights. Did Adidas really need FIFA for its #allin campaign?  Yes it needed the LEDs to drive awareness and sponsorship endorsements to activate but had it not been a sponsor and Nike had it would have still been a better campaign than Nike’s #riskeverything.

Could Digital be sponsorship downfall?

What does the future hold for traditional broadcasters and rights holders? Digital, once seen as the perfect bedfellow for sponsorship could be its downfall. I doubt it, as we still need something to talk about and major events create dialogue. Let’s use the World Cup as an example:

With ever deeper pockets tech companies can become content producers where the major events are mere backdrops for dialogue. The event will always have strong broadcast demand because fans will want to watch the event, but what will advertisers be paying for? To sponsor the event? To sponsor the broadcast? Or to be integrated and involved in the dialogue around it? Most likely the latter because it’s highly cost effective and targeted.

But there is still the broadcast money – which is big!

Well, if the cost of the advertising is being devalued then this will bring the broadcast value down. So if FIFA’s not instigating the dialogue they’re not controlling it and therefore monetising it. The tech / digital giants are -  especially if they become content producers.

Go back to being a sponsorship property, engage with your fans, create value in your brand, become something people want to be associated with and engage with not just advertise around. That’s what sponsors pay for.