WHO WON THE WORLD CUP? 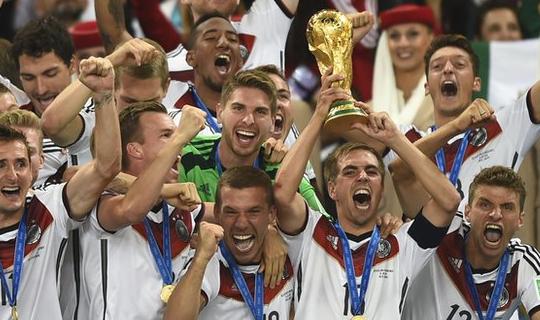 The 2014 World Cup was not short on upsets or drama and despite Brazil going out it was certainly a success on the pitch and for football worldwide. Germany may have won the final but there were many other winners on the pitch as yet again smaller nations triumphed and favourites failed to fulfil expectations. A great example being in the USA where bars, homes and streets were filled with supporters pushing TV ratings up to NBA viewing numbers. This puts the USA World Cup hosting bid in a very strong position and finally gives ‘soccer’ a chance to win over ‘football’ fans in the states. Persistence is a virtue.

As a host Brazil was a success despite the protests - or fortunately lack of - about the investment made in the tournament. As a result the incremental footfall (3.5m) into the country and TV exposure will boost the economy and tourism for years to come. Who watching it didn’t want to be on Copacabana beach (you wouldn’t have if there’d been watching a riot on it!)?

FIFA kept a very low profile as to be expected given the controversy going on and the data that comes out of Brazil re economic impact will be key to them in terms of justifying their position as an economic and cultural ‘game changer’.

Sponsorship wise I feel it was a measured tournament from a global perspective. Sponsors were clever to mix up their pitch side LED inventory with different brands under their portfolios based the countries playing. This increases effectiveness and reduces audience wastage. The only sponsor that stood out with a sponsorship activation campaign that really captured the imagination was Adidas’ #allin ‘all or nothing’ campaign. That’s two from two for Adidas based on London 2012. They are on a roll and the sales figures show it. For me there was a real lack of imagination and creativity as it seems sponsors played safe with basic global media campaigns and creative. A large proportion of major event activation is about getting your campaign talked about, whether that be your advertising, XP, PR, Stunts, competitions or social media. Too many didn’t even start the conversation.

Oh and England didn’t win in case you wondered.