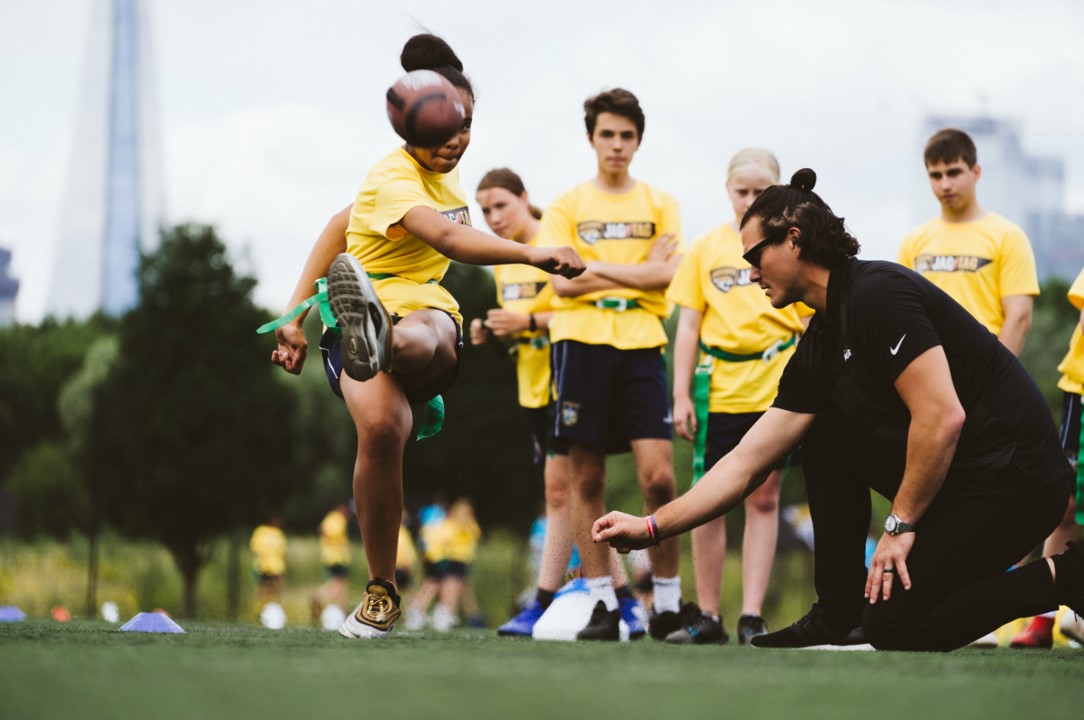 As a team of sport fans, we all look back fondly on our old PE lessons and school sports clubs – from table tennis to trampolining we would give anything a go.

So, as we celebrate National Schools Sport Week this week, we thought we would shine a light on the new sport that is taking UK schools by storm – JagTag, the non-contact American Football grassroots initiative from the Jacksonville Jaguars.

The Jacksonville Jaguars is the only NFL team dedicated to the UK, a commitment that goes far beyond the elite field of Wembley Stadium. Since 2015 the Jaguars has supported an incredible grassroots programme which has gone from strength to strength and today boasts over 70,000 young participants every week taking part in 180 clubs across England, Scotland, Wales and Northern Ireland.

The game, specially designed to gradually up skill novice players, has given kids a chance to experience a sport outside of the mainstream. As such it celebrates a high percentage (38%) of female participants and has also proven exceptionally popular with previously inactive kids.

As Hussain Naqi, Senior Vice President of International Development, said: “First and foremost, it’s all about keeping kids fit and healthy. But our aim is to take the game even further, create the next generation of football fans and maybe even a future NFL star!”

And with visits from Jaguars pro players the programme is sure to inspire the next UK NFL star. Kids of all ages and abilities have been given the chance to learn and play alongside Leonard Fournette, Dede Westbrook and Josh Lambo to name just a few.

Furthermore, the Jaguars have also partnered with LGT Vestra US to offer JagTag participants the chance to see the elite team in action – Reward Rows gives over 500 tickets to the Jaguars Wembley game to schools up and down the country.

Today, American Football is the fastest growing sport in the UK both in terms of participation and popularity, in part thanks to the Jaguars dedication to investing in the grassroots programme. A commitment that is set to last as the team are looking forward to getting back to the field as soon as safe to do so.

“We have kept in touch with our JagTag family throughout the pandemic, and we’re really looking forward to restarting our initiative, amongst our other activity with our ever-growing UK fan base” said Hussain.

Want to find out more about JagTag? Go to https://www.jaguars.co.uk/jagtag